A team of engineers in South Korea have used salt to create a “cost-effective and environmentally friendly” superhydrophobic surface. 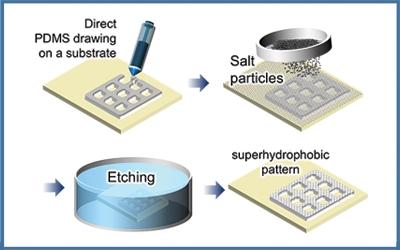 POSTECH
The team says its process can readily be applied to large or three-dimensional surfaces.

Superhydrophobic technologies have attracted attention worldwide due to the water-repellant characteristics and the number and variety of applications, the team from the Department of Mechanical Engineering at Pohang University of Science and Technology (POSTECH) said in a recent research announcement.

Nod to the Lotus Leaf

In nature, ultrahydrophobicity can be observed on a lotus leaf. The leaf has microscopic protrusions on its surface which minimize adhesion, the team explains. As a result, water droplets along with any dirt particles on the surface simply roll right off the leaf. This effect is appropriately referred to the "lotus effect."

There have been numerous research studies into applying the "lotus effect" to other surfaces by simulating similar micro- and nanoscopic surface architectures. Anti-icing, anti-sticking, and self-cleaning characteristics are a few of the many real-world applications of superhydrophobic surfaces.

However, while the idea of a stain-repellent fabric or a self-cleaning building is revolutionary, existing methods of applying a superhydrophobic layer require complicated procedures with exorbitant equipment costs and/or the use of harsh chemicals, the team says.

The team reports it has “successfully overcome these barriers by utilizing a salt-dissolution-assisted etching process.”

Taking advantage of the fact that salt readily dissolves in water, the team said it exposed a salt-particle-embedded polydimethylsiloxane surface to an aqueous environment.

As a result, the surface was roughened with micro/nano-hierarchical topography which satisfied the standards of superhydrophobic surfaces. Furthermore, the process can readily be applied to large or three-dimensional surfaces.

The researchers anticipate that “the salt-dissolution-assisted etching process will be utilized in various fields for numerous applications thanks to its malleable, cost-effective, and environmentally friendly process,” according to the research announcement.

This research was recently published in the journal Applied Surface Science.

The team was led by Professor Dong Sung Kim and was comprised of Research Professor Donghwi Choi and a fourth year undergraduate student Jaewon Yoo. Their work was supported by the National Research Foundation of Korea (NRF) grant funded by the Korea government (MSIP).