Christopher M. Connor, executive chairman for The Sherwin-Williams Company, is set to retire Dec. 31, following a 34-year career with the paint and coatings manufacturer.

As his successor, the Board of Directors has elected John G. Morikis, president and chief executive officer, to assume the additional role of chairman following Connor’s departure, the company announced late Monday (Nov. 7). 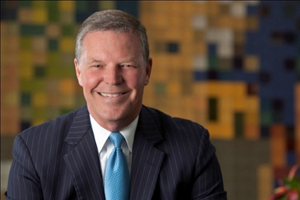 Connor plans to remain a member of Sherwin-Williams’ Board until the end of his current term at the 2017 Annual Meeting of Shareholders in April 2017.

“I’d like to thank Chris for his exemplary vision, guidance and leadership over his distinguished career with Sherwin-Williams,” Morikis said in a statement. “Chris set very high standards for our Company and his influence will be felt for many years to come.”

Connor joined Sherwin-Williams in 1983 as director of advertising for the company’s Paint Stores Group, and served as chairman and CEO for 16 years. During that time, the company grew as a global leader in the paint and coatings industry, posting more than $11 billion in annual sales and operating more than 4,000 company-owned stores.

“Chris led Sherwin-Williams through a period of unprecedented growth and prosperity, and our shareholders benefitted greatly from his leadership and vision,” said John M. Stropki, Sherwin-Williams’ lead director.

Morikis succeeded Connor in the role of president and CEO Jan. 1, 2016. Morikis had served as the coating giant’s chief operating officer for nine years and held many other key leadership positions during his 32 years with the company.

“This announcement is the culmination of a thoughtful leadership transition process for the Company and the Board,” said Stropki. “The Board believes that John’s long and effective career with the Company, and the passion, energy and integrity he exhibits, makes him well suited for the additional position of Chairman and that his election is clearly in the best interests of the Company and our shareholders.”

Morikis holds bachelor’s degrees in business administration and psychology from Saint Joseph’s College in Rensselear, IN, and a master’s degree in business from National Louis University in Evanston, IL.

Sherwin-Williams, founded in 1866, manufactures, distributes and sells coatings and related products to professional, industrial, commercial and retail customers around the world.