The campus of a Dutch university reportedly boasts the world’s first “biobridge,” a span built to test and exhibit the potential of building with more environmentally friendly construction materials.

The 14-meter-long (about 46 feet) footbridge made entirely out of biocomposite materials—specifically fibers of hemp and flax—opened to the public on Thursday (Oct. 27) at the Eindhoven University of Technology (TU/e) in the Netherlands, the school announced.

The structure resulted from a collaboration between students from TU/e, Delft University of Technology (TU Delft), University of Twente and University of Wageningen (known as the 4TU federation), along with several other regional educational institutions and companies.

NPSP Composieten
As of Thursday (Oct 27), the general public was able to begin using the world’s first fully biocomposite footbridge on the Eindhoven University of Technology campus; the 14-meter-long ‘biobridge’ is made from a hemp- and flax-fiber base.

The 4TU partnership aims to pool and strengthen their technical knowledge with the goal of helping to develop highly qualified engineers and technical designers, and to perform socially relevant research.

To develop the biocomposite building materials, hemp and flax fibers were attached to a biological polylactic acid foam (PLA) core, said to be an environmentally friendly replacement for polystyrene, the university explained.

Next, a vacuum was used to suck a bioresin into the fiber layers and create the biocomposite. The final result, when hardened, is a very strong girder, it added.

Other natural fibers such as bamboo could have been used, project leader Patrick Teuffel told online technology news magazine New Atlas, but the students went with hemp and flax because of their abundant availability.

Bioresins are reportedly a greener alternative to traditional resins, as they can be recycled, allowed to degrade or be composted.

While Teuffel admitted that conventional materials such as steel, concrete or carbon fiber are likely stronger and more rigid than the team’s biocomposite, he explained that the difference isn't necessarily as great as you might expect. Moreover, he noted, the biocomposite’s advantage comes from using ingredients that are more abundant and less harmful to the environment.

“Using biocomposite in constructions reduces our dependence on finite fossil resources and brings us a step closer to the circular economy in which products and resources are reused,” says TU/e researcher project leader Rijk Blok.

“In time, I expect that we will see more of these materials in our buildings."

The project officially began in January and a model was constructed in June. With that test model, the project team was able to test the material efficiency of the design, structural integrity of the layers, the strength of adhesive points, paints, heat changes in the curing resin, and vacuum-injection speeds, said Materia, a website reporting on innovative materials.

The students finally began to build the full-scale bridge in August and were able to start testing the structure on Oct. 21, New Atlas reported.

With the bridge load capacity successfully tested for the municipality of Eindhoven, the bridge was moved into place across a stream called the Dommel on the TU/e campus on Oct. 25.

The “biobridge” is intended to remain there for pedestrian use for one year, with 28 sensors in place to measure strain and any bending that occurs from use under real-world conditions. The team will also be able to see data related to temperature, moisture and UV light exposure in real time.

“There have been previous construction projects with biomaterials, but never before were they bearing structures made entirely of biomaterials,” said Blok.

“Through this experiment we hope to learn a lot about the behavior of the biocomposite over the longer term.” 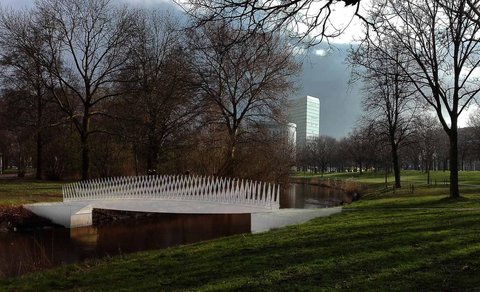 Eindhoven University of Technology
TU/e researcher project leader Rijk Blok acknowledges that although there have been earlier construction projects using biomaterials, this is the first load-bearing structure made entirely of biomaterials.

The project initiators also anticipate that the bridge will demonstrate the potential of biocomposite as a sustainable alternative for what some consider environmentally harmful conventional construction materials.

This was not the first time TU/e students attempted to build a bridge from natural materials.

Students and volunteers set out to build the world’s longest bridge made of ice in December 2015, but unanticipated high temperatures thawed and collapsed the structure last February.

Additional partners in the biobridge collaboration included composite company NPSP Composieten and the Center of Expertise Biobased Economy, a collaboration between Avans Hogeschool and HZ University of Applied Sciences.