Road, rail, air or Hyperloop? What many see as the next generation of high-speed, long-distance transportation options may be one step closer to becoming a reality.

Jakob Lange, a partner in Copenhagen- and New York-based architectural and design group Bjarke Ingels Group (BIG), recently unveiled a sneak peek of plans for a Hyperloop One system connecting Dubai to Abu Dhabi in the United Arab Emirates. The two cities are situated more than 93 miles apart.

A system like the Hyperloop has the potential to transform the way people live, according to Lange, allowing them to reside wherever they want when transportation times to the workplace can be dramatically reduced.

"We are in a new time now where you can develop a new transportation system in very few years and change the world," says Lange. 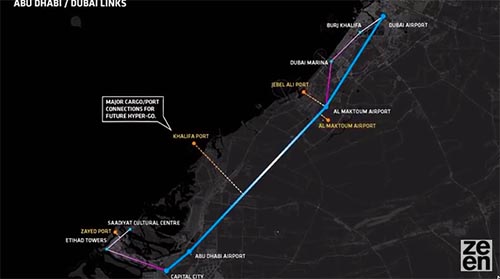 Bjarke Ingels Group
BIG's Jakob Lange describes the impact high-speed transportation systems like the Hyperloop could have on the future of both infrastructure and quality of life, while giving a sneak peek of the system proposed for the United Arab Emirates.

Lange is also the director of BIG Ideas, a department within the company, which tackles experimental and technical challenges for the company’s projects. The division is also responsible for helping to develop the full scope of what the Hyperloop can become.

While some describe the transportation concept as “futuristic,” Lange says: "We're not waiting for new technology like carbon nanofibers or anything in order to do this. We have everything we need to do it."

The transportation system makes use of a depressurized cylinder made up of a series of steel tubes through which levitating cylindrical passenger (or freight) pods travel at high speeds on a cushion of air.

As reported earlier, according to Rob Lloyd, CEO of Hyperloop One (then known as Hyperloop Technologies), the Hyperloop can be built at 60 percent of the cost of rail lines, travel at three times the speed and, with its with its strict point-to-point travel, offer more flexibility than trains.

If installed between San Francisco and Los Angeles, the Hyperloop, capable of speeds of 700 mph, is expected to reduce travel time between the cities to 30 minutes.

Musk open-sourced the project, inviting others to strike out on their own and make his concept a reality. Hyperloop One and its main competitor Hyperloop Transportation Technologies put engineering teams to work on functional prototypes. Musk is reportedly no longer directly involved in its development.

In May, Hyperloop One, conducted its first public “propulsion open-air test” (POAT) of its electromagnetic propulsion system on a track north of Las Vegas. The day before testing, the company announced a partnership with a number of infrastructure, design, engineering and financial companies, including Aecom and Arup, which were tasked with developing the infrastructure for the technology.

At the time, it said it planned to have a fully operational model of the system ready for testing by the end of the year. According to Teslarati, an online source covering news related to Elon Musk’s ventures, a full system test loop is under construction and will be ready for testing early in 2017.

Filling in the Blanks

What remains to be seen are the concrete details regarding how the Hyperloop One Dubai-to-Abu Dhabi system will be built, the construction timeline, and the estimated project cost, Teslarati notes.

Additional information not yet addressed include the potential problems related to making the vacuum chamber, how vibrations will impact steel walls less than one inch thick, and the temperature impact desert climates will have on the steel, among others, the news site states.

BIG will officially unveil its design Nov. 7 in Dubai.