A new rule that would put federal contractors under much closer scrutiny was delayed by a preliminary injunction from a federal judge in Texas Tuesday (Oct. 25), the day it was scheduled to go into partial effect.

The U.S. Department of Labor's Fair Pay and Safe Workplaces Rule—referred to by critics as the “blacklisting” rule—requires prospective federal contractors bidding on projects over $500,000 to disclose labor law violations in the last three years. It stems from an executive order signed by President Barack Obama on July 31, 2014. 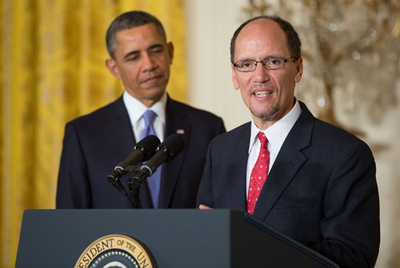 Several groups, including the Associated Builders and Contractors, have fervently opposed the rule, bringing a legal challenge Oct. 7 in the U.S. District Court for the Eastern District of Texas.

Judge Marcia A. Crone issued the preliminary injunction in the case Monday (Oct. 24) evening, noting that the groups had “properly demonstrated immediate and ongoing injury to their members if the rule is allowed to take effect,” Politico reports.

She also wrote that the regulations “appear in conflict directly with every one of the labor laws they purport to invoke by permitting disqualification solely upon ‘administrative merits determinations’ that are nothing more than allegations of fault asserted by agency employees and do not constitute final agency findings of any violations at all.”

Further, Crone wrote that the group’s argument that the executive order and subsequent rule from the Federal Acquisition Regulatory Council violate the First Amendment has merit because they require contractors to publicly disclose violations of any of the 14 federal labor laws “without regard to whether such violations have been finally adjudicated after a hearing or settled without a hearing, or even occurred at all.”

In a statement applauding the ruling, ABC Vice President of Regulatory, Labor & State Affairs Ben Brubeck said, “Associated Builders and Contractors is pleased the court ruled that the Obama administration cannot order private businesses to publicly disclose mere accusations of labor law violations that have not been fully adjudicated.”

“By issuing this decision, the court has maintained the First Amendment rights of government contractors and protected them and taxpayers from the poorly crafted blacklisting rule.”

According to Perez, companies with a history of labor-law violations continue to receive lucrative federal contracts. A study released in 2013 found that almost 30 percent of the top violators of federal wage and safety laws were also current federal contractors.

Proponents say the order and subsequent rule are attempts to “fix a broken system.”

For additional information on the Fair Pay and Safe Workplaces Rule and its scheduled rollout, click here.