San Francisco’s Department of Building Inspection is on a renewed mission to convince property owners to retrofit their buildings to make them safe during powerful earthquakes.

Large notices with the words, “EARTHQUAKE WARNING: This Building is in Violation of the Requirements of the San Francisco Building Code Regarding Earthquake Safety” [emphasis in original] written in English, Spanish and Chinese, will soon be placed on risky structures about the city. The department estimates that only about 40 percent of the city’s buildings are in compliance with 2013 regulations mandating retrofits. 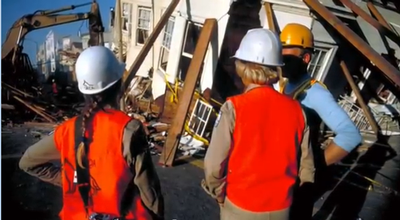 The campaign, first initiated two years ago, will involve putting up new notices in September 2017, according to CBS San Francisco.

Tom Hui, the director of the city’s Department of Building Inspection told CBS, “The earthquake can come at anytime, even tonight or tomorrow,” noting that his push to get buildings shored up comes from a memory of seeing building collapses in the Marina during 1989’s Loma Prieta quake.

Under the program, retrofits are required for all wood-framed buildings permitted for construction before Jan. 1, 1978, with two or more stories over a soft or weak story that contains five or more dwelling units.

In furtherance of its efforts, the city has hosted Earthquake Retrofit Fairs to connect designers, lenders, contractors and property owners and offers resources on its website.

The announcement of the renewed effort comes just days after news broke that U.S. Geological Survey researchers found a link between two earthquake fault lines under the muddy San Francisco Bay. The finding connects some 115 miles of fault zones; the longer the fault, the more disastrous of an earthquake that it can produce, the study authors say.

“You have to understand that there are over 2.4 million people living right along this fault, and the population of this whole area is around 7.5 million,” said David Ponce, a geologist with the research group. “It also turns out that major transportation, gas, water and electrical lines cross this fault. So when it goes, it's going to be absolutely disastrous,” Ponce told Popular Mechanics.

The study’s authors say that when the fault next slips, it could produce a big one: “Up to a magnitude 7.4 earthquake, which would be California’s 5th largest earthquake and very likely its most deadly.”

Ponce estimates there’s a 32 percent chance such a quake could happen in the next 30 years.

Building losses from earthquakes are a real threat across the country, according to the U.S. Geological Survey.

A study last year found that the average long-term value of building losses from earthquakes is $4.5 billion per year, with most of those losses concentrated in California, Oregon and Washington state.

Further, more than 6,000 fire stations, 800 hospitals and nearly 20,000 public and private schools are located in areas most at risk of strong ground motion in the U.S.