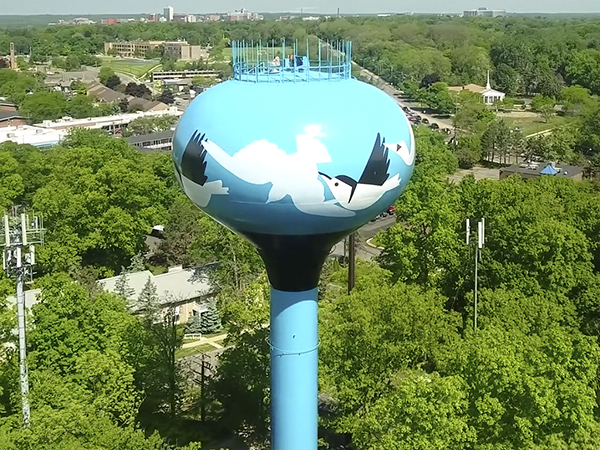 “The Ann Arbor water tower was repainted this year using a design that depicts various birds in flight, as well as fish swimming in the Huron River, which supplies drinking water to Ann Arbor,” said Doug Hansen, director of Tnemec's Water Tank Market.

The design had been the winning entry in the city’s “Art in the Sky” public art contest, which drew nearly 600 entries from city residents of all ages, he added.

A panel of water tank enthusiasts selected the Ann Arbor elevated water tank as the 2016 winner from 12 finalists. Competitors were evaluated based on criteria such as artistic value, significance of the tank to the community, and challenges encountered during the project.

In addition to the judging panel, which selects the overall winner, each year Tnemec also invites the public to vote to determine the annual People’s Choice winner.

This year, the honor went to an elevated tank in Houston County, GA, which received the largest number of online votes. The People’s Choice winner was announced Oct. 17.

The area’s 500,000-gallon-tank features a vivid red, white and blue design along with the acronym, EDIMGIAFAD, which stands for "Every Day in Middle Georgia is Armed Forces Appreciation Day."

Having already earned the people’s recognition, the Houston County tank’s patriotic color scheme also remained in the running for the title of 2016 Tank of the Year.

For almost 50 years, Tnemec has supplied coatings and linings for water storage tanks, protecting them from corrosion, ultraviolet light degradation and exterior weathering.


In 2006, to celebrate water tank coating projects around the world, Tnemec created the annual Tank of the Year contest. The competition for Tank of the Year has grown every year since then, according to the company, with more and more water tanks entering the contest and increased involvement from a wide range of applicators, engineers, municipalities and communities.

“This is the 11th anniversary of the Tank of the Year competition, which recognizes the most impressive coatings projects in the water tank industry,” Hansen noted.

“This year, 246 water tanks were nominated from across the U.S. and Canada,” he added. “We are thrilled with how the contest has grown year after year due to individual communities supporting their local water tanks.”

The Tank of the Year will be featured in the month of January in Tnemec’s 2017 water tank calendar. All finalists and nominations will be included in the following months of the calendar.

Nominations for next year's competition will begin in March 2017.