"Producing even better coatings" is a goal of a team of researchers at one Singapore science and technology agency that is looking at coating material microstructures in order to make protective coatings tougher.

The team at A*STAR (Agency for Science, Technology and Research) has discovered how hard materials like chromium nitride—used as wear and corrosion protection coatings—behave when used in high-stress situations, the government agency reported Friday (Oct. 7).

Resistance to wear can be improved by increasing a material’s hardness—that is, the force it can withstand before it begins to deform, A*STAR notes. 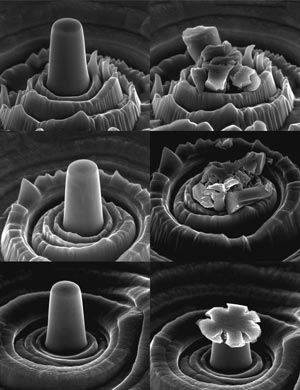 “In most crystalline materials, this deformation occurs when defects, known as dislocations, start to move through a material’s crystal structure,” the agency explains.

Materials used in coatings tend to be very brittle, they add. However, past research has shown that it can be very difficult to break crystals that are extremely small.

This inspired Shiyu Liu, and his team from the A*STAR Singapore Institute of Manufacturing Technology, to see how chromium nitride-based coatings deform under pressure.

After forming microscopic “pillars” of the materials, measuring about 380 nanometers across, they compressed the structures under a diamond flat punch in a scanning electron microscope at temperatures up to 500 degrees Celsius (932 degrees Fahrenheit).

The team found that chromium-nitride-based coatings made with very fine grains—i.e., those about 10 nanometers in size and separated by a thin grain boundary phase—withstood a much greater force before they deformed.

In fact, “deformation began at stresses very much higher than expected, and close to the theoretical maximum value from calculations,” the researchers report.

Liu's team explains that this increase in stress resistance became evident when the grains were so small they did not contain dislocations; as a result, the applied forces had to be sufficiently large to form new dislocations within the grains.

Moreover, the thin grain boundary phase was originally thought to be the main factor in determining the material’s properties, they note; however, their research demonstrates this was not the case. As a result, this can provide a way to reliably make a hard material, they add.

A*STAR reports that the team’s results show that the formation of a fine-grained microstructure could provide a ceramic coating with enhanced hardness and fracture toughness.

“This could be a viable approach for the development of super-hard and tough protective coatings for high-temperature and high-pressure applications,” says Liu.

The team plans to use the results in advanced manufacturing and engineering applications, such as protective coatings in high-speed machining tools for titanium and nickel-based alloys, the agency says.

The team’s research has been published recently in Scripta Materialia and Applied Physics Letters.

Established in 1991, A*STAR is Singapore's lead government agency, housed under the Ministry of Trade and Industry of Singapore and dedicated to fostering world-class scientific research and talent for a vibrant knowledge-based economy.