Growing electric automaker Tesla is denying reports that its paint shop could be the source of a bottleneck that could slow its expanding production capacity.

Edward Niedermayer of the website Daily Kanban levied the allegations that the paint shop at Tesla’s Fremont, CA, manufacturing facility can only finish up to 219,000 units per year in order to remain in compliance with California emissions regulations. The company has said it plans to ramp up production to 500,000 cars per year in 2018.

Daily Kanban, which covers the automotive industry, reports that it obtained permit documents showing that the facility is currently able to produce up to 25 vehicles per hour in its first year of operation, which would extrapolate to 219,000 vehicles per year, if the facility were operating at full capacity, 24 hours a day, seven days a week. 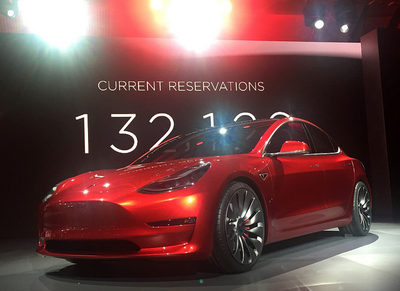 Steve Jurvetson, CC-BY-SA 2.0, via Flickr
The move to ramp up production comes with the addition of Tesla’s Model 3, a new four-door luxury sedan.

The publication reports that Tesla has yet to apply for additional permits to increase capacity beyond that level. Tesla has been expanding its footprint in Fremont, where it opened its first auto assembly plant in 2010.

Fremont, in the San Francisco Bay area, is subject to some of the nation’s most stringent emissions regulations. The rules governing automotive coating VOC emissions in the district in which Fremont is located call for limits of 3.5 lbs./gallon of VOCs on automotive topcoats, for example, considerably lower than the 6.0 lbs/gallon limit set nationwide by the EPA, according to Daily Kanban.

Electrek notes that Daily Kanban reported previously on complaints about Tesla to the National Highway and Transportation Safety Administration, which turned out to be false, and points out that the emissions report from the website is predicated partly on assumptions about the rate of VOCs in the paint Tesla uses on its vehicles.

The move to ramp up production comes with the addition of Tesla’s Model 3, a four-door luxury sedan that joins the company’s Model S, Model X and Roadster models. The company announced in April 2016, just a week after unveiling the car, that it had already received more than 325,000 reservations for the $35,000 Model 3.

Earlier this year, the Fremont paint shop was in the news when The Mercury-News reported that subcontractors working on the construction of the factory were allegedly being brought into the United States on “questionable visas” and were not being paid fairly.

The company settled in July with one worker, Gregor Lesnik, who was featured in the report, and who was injured on the job.

Tesla, run by billionaire CEO Elon Musk, was founded in 2003, and began production of its first cars in 2008. The company has sold 163,000 vehicles since it began manufacturing them. Tesla also develops and manufactures automotive battery products.