Penn Station to Get Revamp

In an effort to ease congestion in what has been described as one of the busiest transit halls in the western hemisphere, as well as one of the most crowded and confusing, Cuomo’s strategy calls for the complete transformation of the nearby historic James A. Farley Post Office building into a world-class transportation hub, his office announced Tuesday (Sept. 27).

Scheduled for completion by December 2020, the new Pennsylvania Station complex will include conversion of the Farley Building into a 255,000-square-foot train hall, which will accommodate both Amtrak and Long Island Rail Road (LIRR) service. 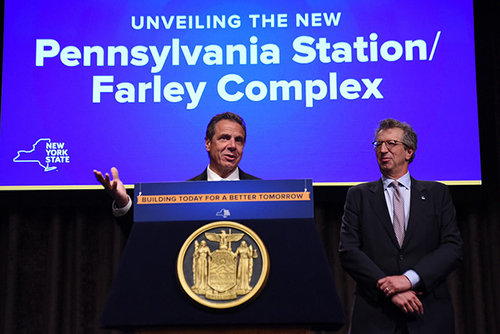 Don Pollard/Office of Governor Andrew M. Cuomo
Gov. Andrew M. Cuomo unveiled sweeping plans for the complete transformation of the historic James A. Farley Post Office into a world-class transportation hub, as well as the selected construction team, at an Association for a Better New York luncheon.

The hall will be known as the Moynihan Train Hall, named after the late Senator Daniel Patrick Moynihan, who had originally championed the idea of turning the Farley Building into a train station as part of a Penn Station restoration.

“New York’s tomorrow depends on what we do today, and the new Moynihan Train Hall will be a world-class 21st century transportation hub,” Cuomo said.

According to Cuomo, Penn Station is “overcrowded, decrepit, and claustrophobic” because it serves two times the passengers of JFK, LaGuardia, and Newark airports combined. According to The New York Times, that’s about 600,000 passengers "on any given day"—triple what the station was designed to handle.

“The Moynihan Train Hall will have more space than Grand Central’s main concourse, housing both Amtrak and LIRR ticketing and waiting areas, along with state-of-the-art security features, a modern, digital passenger experience, and a host of dining and retail options,” he explained.

“This is not a plan—this is what’s going to happen,” Cuomo stated. “People are going to walk through this station and recognize that this is New York.”

Preconstruction is slated to begin this fall.

The governor revealed the plans during a luncheon speech before the Association for a Better New York, where he also named the chosen developer-builder team composed of three firms: Related Companies, Vornado Realty LP and Skanska AB (RVS).

The Moynihan Train Hall will feature a new skylight on the building’s historic and architecturally dramatic steel trusses and a 50-percent increase in floor space from Penn Station.

Intended to serve riders on the LIRR and Amtrak, and eventually accommodate passengers from Metro-North, a total of nine platforms and 17 tracks will be accessible from the Train Hall.

The JV partners have all provided guarantees to complete the $1.595 billion project on time and, as part of the agreement, will pay the state a total of approximately $600 million in recognition to the value of the development opportunity within the Farley Building, the governor’s office said.

Empire State Development will provide support of $570 million for the project, with the remaining $425 million to come from a combination of Amtrak, LIRR, Port Authority and federal government sources, it added.

The project intends to use union labor and has committed to fully meet the governor’s nation-leading goal to have 30 percent of the work completed by Minority and Women-Owned Business Enterprises.

Simultaneously, the Metropolitan Transit Authority will also begin a comprehensive redesign of the LIRR’s existing 33rd Street concourse at Penn Station in an effort to significantly improve passenger experience and circulation.

The MTA redesign is intended to nearly triple the width of the existing corridor, which is reportedly among the busiest sections of Penn Station. This is expected to significantly decrease congestion and result in notably higher ceilings, according to the governor’s office. Brighter lighting and new way-finding, ticketing and informational systems are also planned.

At a cost of $170 million, construction of the LIRR concourse and the subway stations will conclude by or before completion of the work on the Farley Building’s Moynihan Train Hall, according to officials.

The MTA is expected to issue an RFP for the preliminary design of Penn Station improvements to prequalified consulting firms imminently, with a contract to be awarded by the end of the year.

Additionally, the MTA will tackle an extensive renovation to the adjacent Seventh and Eighth Avenue subway stations as part of the redesign, the governor said. This includes upgrading the two subway stations at Penn Station.

Many of these improvements to subway stations on Seventh and Eighth Avenues are expected as early as 2018 and will cost approximately $50 million.

In January, Empire State Development, Amtrak, and the MTA issued a Request for Expressions of Interest (RFEI) for redeveloping Penn Station.

As Amtrak relocates to the Moynihan Train Hall, the RFEI responses provided ideas for the future proposed redevelopment of the current Amtrak concourse that will be incorporated into concepts previously suggested by the railway operators.

ESD will partner with Amtrak on the creation of an RFP for this concourse.