Coatings research performed at a Department of Energy science and technology lab has caught the attention of one popular electronics brand seeking to help its line of mobile electronic devices repel water and more.

Building from about three years of superhydrophobic research on glass-based coatings, the Oak Ridge National Laboratory developed a transparent coating that reportedly repels water that carries away dust and dirt, reduces light reflection, and resists fingerprints and smudges. 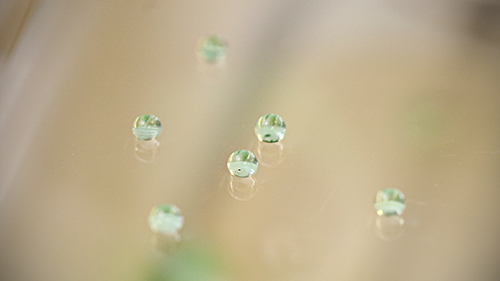 To be superhydrophobic, a surface must achieve a water droplet contact angle exceeding 150 degrees, the lab explained. ORNL’s coating has a contact angle of between 155 and 165 degrees, so water literally bounces off or rolls away, taking dust particles along with it.

The research team, led by co-inventor Tolga Aytug, developed the superhydrophobic technology by depositing a specially formulated glass coating onto a glass surface. After the deposition, they heat treated the coated glass to transform the surface into two material compositions.

Next, they employed a selective etching process that produces a porous three-dimensional network of high-silica content glass that is described as sponge-like or resembling microscopic coral. This surface enables multiple functionalities, said Aytug, such as its water-repellent and antireflective properties.

Beyond electronics, the technology holds significant potential for applications in solar panels, lenses, detectors, windows and many other products, according to the lab. The fields of solar panels and architectural windows are still available for licensing, it noted.

Co-inventor Parans Paranthaman noted, “We are hoping that in the near future we can all see the benefits of this technology in our daily lives.”

The work was supported by ORNL’s Laboratory Directed Research and Development Program and Technology Innovation Program.

UT-Battelle manages ORNL for DOE’s Office of Science. The Office of Science is the single largest supporter of basic research in the physical sciences in the United States, and is working to address some of the most pressing challenges of our time.