Study: Ruby is the New White for Roofs

A new study suggests that dark colored roofs can stay just as cool as those painted white, according to research from the Lawrence Berkeley National Laboratory.

The study, which colored cool roof coatings with ruby red pigment, found that fluorescence, or photoluminescence, made the red roof perform just as well as or better than lighter-colored roofs.

Lab researchers have published their findings in the journal Solar Energy Materials & Solar Cells, according to a recent announcement from the lab.

By reflecting the sun’s rays back to space, these cool materials also release less heat into the atmosphere, thus cooling the planet and offsetting the warming effects of substantial amounts of greenhouse gas emissions, according to Berkeley Lab.

Reflective roofs, also called cool roofs, save energy by keeping buildings cooler, according to the lab. The result is a more efficient design that relies less on air conditioning. 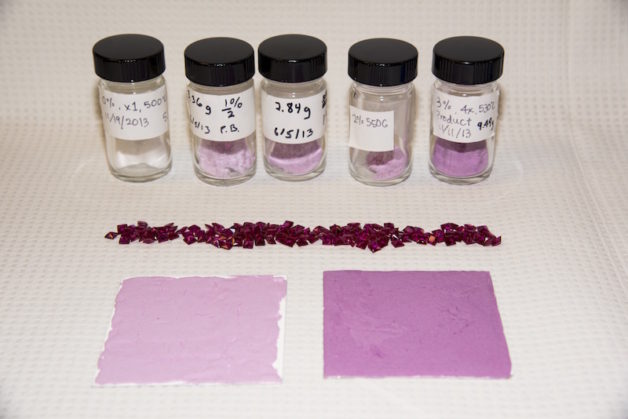 However, according to the scientists, wider adoption of cool roof technologies has been challenging due to aesthetic concerns. Many roofing material manufacturers say their clients opt for darker colors for their roofs, the scientists relate.

Thus, the Heat Island Group has spent 15 years utilizing special pigments that strongly reflect invisible “near-infrared” light to create dark surfaces that stay cooler in the sun than conventional dark surfaces, though still not as cool as white surfaces.

The new study, however, shows that fluorescent cooling can boost the performance of these pigments by re-emitting at longer wavelengths some of the visible light that the surface must absorb to appear dark, the lab reports.

The breakthrough opens the door to darker colors of not only cool roofs, but of any object that is subject to prolonged periods of sun exposure, including vehicles, ships, storage tanks, and PVC piping, Berkeley Lab relates.

Using fluorescence for cool materials is a new concept, and lead scientist Paul Berdahl, who is a physicist by training, has a patent pending on the technology.

“People understand that materials that fluoresce are emitting energy,” he said in a statement. “What’s new here is the use of the fluorescence process to keep buildings cooler.”

He explains that when light hits a fluorescent material, the material actively emits energy in response, rather than passively reflecting the energy.

Berdahl said he wanted to find a material that would absorb visible light and fluoresce (re-emit) mostly or entirely in the invisible near-infrared portion of the sun’s spectrum.

“There have been thousands of fluorescent compounds identified,” he said. “Ruby’s properties are well known and well studied, and I realized it’s a material that could work.”

To begin his work, he experimented with an array of synthetic ruby crystals, which were inexpensive and purchased online. Berkeley Lab reported that when attached to a bright white coating and exposed to bright sunlight, the dark-red ruby-covered coating stayed cooler than an off-white surface.

Berdahl and research associate Sharon Chen then created ruby powder, or aluminum oxide, doped with varying amounts of chromium to create different shades of red pigment. They prepared ruby paint from the powders, and applied these paints over bright white substrates. When exposed to sunlight, the ruby paint samples stayed as cool as white materials.

“The ruby powder does need more work to make it as deep red as the ruby crystal,” Berdahl said.

Should commercialization occur, Berdahl said the cost of the coatings would not be substantial and its durability would rival other cool coatings.