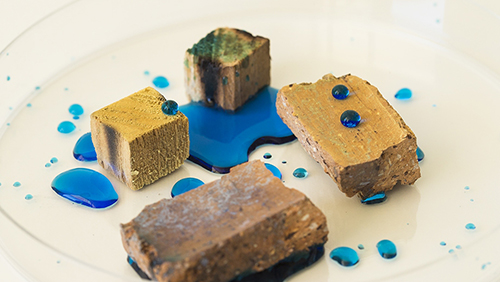 "The surface is a layer of nanoparticles, which water slides off as if it's on a hot barbecue," states William Wong, a Ph.D. student at the Nanotechnology Research Laboratory at the ANU Research School of Engineering.

Wong indicates the new "ultra-robust" coating can be applied to "practically anything": clay, stone, bricks, cardboard, wood, paper, metal, plastics, windows, building materials and marine applications. And whereas existing superhydrophobic coatings are reported to be very susceptible to wear damage, the ANU team says it was able to retain the micro nanostructures of its coating, even after extensive wear.

In addition to its waterproofing properties, the team claims it pulled off a number of achievements with its new coating.

They were able to develop a coating more robust than existing coatings, the engineers say, because it was created by combining two plastics, one tough and one flexible.

"It's like two interwoven fishing nets, made of different materials," Wong says.

According to technology news site New Atlas, the two plastics are polymethyl methacrylate and polyurethane. They make the coating up to 60 times more functionally robust than other test materials, it reported.

"Their cross-linking and material-synergistic properties create a much more robust hybrid (interpenetrated polymer networks) than either of these alone," say the researchers.

They also developed two ways of creating the material, which happen to be cheaper and easier than current manufacturing processes, according to the university.

One method uses a flame to generate the nanoparticle constituents of the material, the scientists say. For lower temperature applications, the team dissolved the two components into a sprayable form.

Moreover, the water-repellent coating is also transparent and extremely resistant to ultraviolet radiation, the researchers add. It also reportedly resists damage from acids and solvents like cleaning alcohols.

"We have not yet tested it for every use but believe that for most applications it will be a long-term coat that does not require reapplication," the ANU team told New Atlas.

Lead researcher and head of the Nanotechnology Research Laboratory, Associate Professor Antonio Tricoli, anticipates the new material could change how we interact with liquids.

"It will keep skyscraper windows clean and prevent the mirror in the bathroom from fogging up," he says.

"The key innovation is that this transparent coating is able to stabilize very fragile nanomaterials resulting in ultra-durable nanotextures with numerous real-world applications," he adds.

In addition to waterproofing, the new ability to control the properties of materials could be applied to a wide range of other coatings, Wong suggests.

"A lot of the functional coatings today are very weak, but we will be able to apply the same principles to make robust coatings that are, for example, anti-corrosive, self-cleaning or oil-repellent," he explains.