An new order designed to ensure that contractors who disobey rules aren't rewarded with federal work are set to take effect next month, authorities have announced.

Starting in October, contractors hoping to land jobs with the U.S. federal government will have additional hurdles to jump, as the Fair Pay and Safe Workplaces Executive Order goes into effect.

Originally issued in July 2014 and amended this year, the act goes into effect Oct. 25 and requires businesses seeking federal contracts of over $500,000 to disclose not only civil and administrative proceedings against them, but also violations of any of 14 listed workplace protections in the past three years. 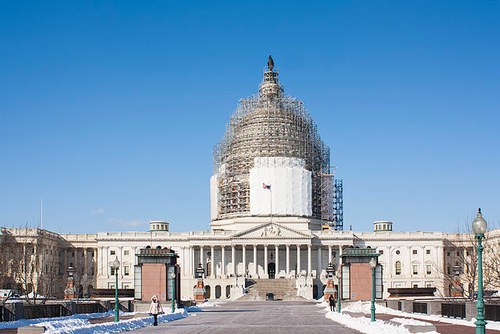 Macieklew / CC BY-SA 4.0  / Wikimedia Commons
The new act requires businesses seeking federal contracts of over $500,000 to disclose violations of any of 14 listed workplace protections in the past three years.

The final rule was published Wednesday (Aug. 24) by the Department of Labor and the Federal Acquisition Regulation Council.

The Department of Labor holds that the new rules ensure contractors who don’t follow the rules aren’t rewarded with federal contracts, and those who do are given a fair chance. Some industry voices, though, say the act goes too far in “blacklisting” companies that violate rules some consider to be “unfair.”

The labor law violations that must be disclosed according to the new rule include those related to: wage and hour laws, including the Davis-Bacon Act; health and safety rules; collective bargaining; family and medical leave; and civil rights protections, including the Americans with Disabilities Act.

The rules address only prime contractors at first; they will be applied to subcontractors beginning in October 2017.

Further, the rule's three-year window is not effective immediately; when the rule first takes effect, it will only apply to violations after October 2015. That essentially gives a “clean slate” for companies with violations before that date, explains analyst James J. Murphy, of law firm Ogletree Deakins.

Murphy also points out that there is a provision of the rule allowing “members of the public” who have information about violations to blow the whistle on contractors who haven’t fully disclosed.

In January 2017, provisions will go into effect requiring federal contractors to provide transparent documentation of wage information to their employees. Additionally, as soon as the act takes effect in October, companies with contracts of at least $1 million will be prevented from forcing arbitration for employees with sexual assault or civil rights claims.

The Department of Labor is conducting a pre-assessment process for potential contractors to help them understand the new method and mitigate issues that might exist in their history; that process begins next month.

The act’s ultimate repercussions for defense contractors, however, remains in limbo: Earlier this month, Bloomberg reported that language in the National Defense Authorization Act, which has not yet passed the Senate, would exempt contractors for the DOD from the regulations.

As of Aug. 26, the legislation, passed by the House in May, states, “The provisions of Executive Order 13673 and any implementing rules or regulations shall not apply to the acquisition, contracting, contract administration, source selection, or any other activities of the Department of Defense or the National Nuclear Security Administration.”

‘Stripping of Due Process’

Industry arguments against the new rule largely center around the idea that enforcement can be subjective, and that violations must be reported even if they haven’t gone through the entire appeals process.

Ben Brubeck, vice president of Regulatory, Labor and State Affairs for the Associated Builders and Contractors, said in a statement, “ABC supports a level and transparent playing field for federal contractors and believes unethical firms should be held accountable. However, our initial concerns regarding the proposal’s stripping of due process rights while also adding unwarranted uncertainty by empowering bureaucrats to subjectively pick winners and losers in the federal contracting marketplace remain.”

The Associated General Contractors of America issued a statement that reads in part: “This new measure permits unelected federal bureaucrats to make arbitrary decisions about which other firms will be singled out for punishment. Even worse, this new rule gives those same federal officials broad latitude to impose separate and inconsistent consequences on those firms.”

Labor groups have expressed support for the measure.

“For too long, contractors with terrible workplace records were awarded contracts with little to no accountability,” the Laborers’ International Union of North America said in a statement. “With this new rule the federal government will award contracts using tax payer dollars to contractors who respect the law and its workers.”

Others are simply concerned that the process will lead to confusion. Analyst Charles Tiefer told Bloomberg, “The Labor Department is going to be overwhelmed with confusing submissions by potential subcontractors and not be able to separate the important from the unimportant.”

Secretary of Labor Thomas Perez said the measure will have a positive effect for both management and labor.

“The regulations and guidance we are announcing today seek to ensure a level playing field for contractors and workers alike,” Perez said.

Not the First Time

While the executive order adds considerably to the burden for federal contractors, it’s not the first time firms seeking government contracts have dealt with this sort of procedure.

Similar rules, also heralded by some as a “blacklist,” were put into effect in the waning days of the Clinton administration, in 2000, but were rolled back in 2001 after George W. Bush took office.