Scientists in Singapore report that they have developed “a smart window coating” that would allow most of the sun’s light in, while blocking most near-infrared radiation.

“Our infrared shielding coating, with 10-nanometer antimony-doped tin oxide nanoparticles, blocks more than 90 percent of near-infrared radiation, while transmitting more than 80 percent of visible light,” according to Hui Huang of the A*STAR Singapore Institute of Manufacturing and Technology. 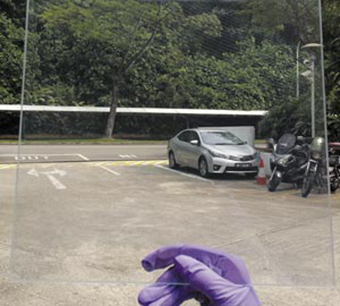 ©
The team says the coating technique could one day be utilized on-site to existing windows.

The researchers recently published their findings in the journal Materials & Design.

Huang and his coworkers coated glass with tin oxide nanoparticles doped with small amounts of the element antimony. By varying the nanoparticles’ antimony concentration, the team said it could optimize the ability to absorb near-infrared radiation.

The team produced the tiny nanoparticles using a synthesis process known as the “solvothermal method.” The technique requires an autoclave, a special vessel where precursors are heated under pressure.

The method permits synthesis at relatively low temperatures and tight control of nanoparticle size, which is key when trying to block some wavelengths of light while allowing others to pass through, according to the team.

“In tropical Singapore, where air conditioning is the largest component of a building’s energy requirements, even a small reduction in heat intake can translate into significant savings,” notes Huang.

The work has already attracted the interest of local industry.

“A local glass company supporting this project is interested in licensing this smart window technology with infrared shielding,” said Huang.

The coating technique could eventually be applied on-site to existing windows, the team adds.

The quest to make our windows smarter and more energy efficient has sparked numerous research efforts at institutions in the United States; many of which have been subjects of past Durability + Design News coverage.

Researchers at the University of Texas, Austin, say they have a invented a low-temperature production method they think could result in cheaper, flexible smart windows. Scientists at the Massachusetts Institute of Technology report they have developed windows that will darken themselves with the flip of a switch. Professors at the University of Colorado at Boulder are looking to liquid crystal research to increase the efficiency of windows without compromising transparency.

Moreover, a team of researchers at the U.S. Department of Energy’s Lawrence Berkeley National Laboratory recently announced that it was creating a polymer heat-reflective coating that can be painted on windows to improve their performance.