As part of its infrastructure improvements program, Chicago’s commuter rail system plans to use paint to pay homage to the area’s historic contributions to the railroad industry.

In its rehabilitation of the 111th Street/Pullman Station, Metra will paint the warming house to resemble the Gertrude Emma, a Pullman Palace Car Company railcar that was manufactured in the South Side neighborhood. 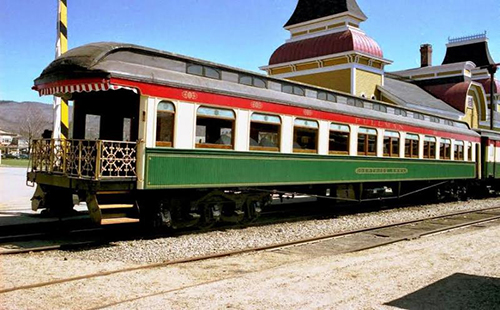 Photos: Metra
Chicago's Metra rail system plans to paint a new warming house at the Pullman Station in the colors of the Gertrude Emma (shown), a Pullman Palace Car Company, to celebrate the neighborhood's historic significance to the railroad industry.

The railcar was used on the Pennsylvania Limited between Chicago and New York in the late 19th and early 20th centuries.

“The extra effort in planning the painting of the station warming house reflects the heritage of rail passenger cars constructed and operated by The Pullman Company.”

The 111th Street/Pullman Station is considered a gateway to the Pullman National Monument, according to Metra officials. Also known as The Pullman District and Pullman Historic District, it was reportedly the first model, planned industrial community (i.e., company town) in the United States.

The district was named a National Monument on Feb. 19, 2015, making it a part of the National Park System.

Metra started making improvements to the Pullman Station on the Metra Electric Line in June.

Painting is included among the project’s other cosmetic improvements, and painting the warming house in Pullman colors will come at no additional cost, Metra noted. Specific information on the coatings to be used was not immediately available.

“We are pleased to add character to this station that will honor a unique Chicago neighborhood and enhance the gateway to the Pullman National Monument,” Metra Executive Director/CEO Don Orseno said of the paint design Tuesday (Aug. 23).

“As a member of the steering committee for the Pullman Transportation Plan, we want to encourage tourism to this historic site.”

“The updated improvement plan will mean the 111th Street Station not only will receive the much-needed repairs residents deserve, it also will become another important asset that will help bring more people to Pullman to go to work, to live and to play,” Beale said.

Painting is expected to start in early September shortly before the project is finished.

The project is part of Metra’s 2016 construction program, which includes approximately $200 million in infrastructure improvements to 27 stations, 21 bridges and 24 road crossings, as well as the replacement of 120,000 rail ties to ensure safe and reliable service and maintain a state of good repair system-wide.