Painting Bees for a Cause

When you’re an artist, getting some buzz for your work is always a good thing. The murals painted by Matthew Willey, though, make a buzz all their own: They feature honeybees. 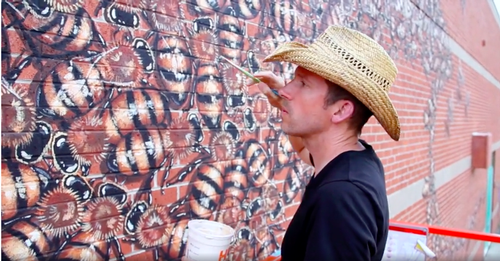 Images: © 2016 The Good of the Hive
Matthew Willey has committed to painting 50,000 bees around the world.

It’s not just an aesthetic fixation for Willey, who hails from Asheville, NC. The artist has been putting up bee murals across the country in an effort to bring attention to plunging bee populations—and he has plans to go worldwide.

In a project he calls the Good of the Hive Initiative, Willey has committed to painting 50,000 bees around the world—the number, the website Colossal points out, needed to sustain a healthy hive. In part, it’s to raise awareness of colony collapse, the phenomenon in which honeybee populations have dwindled in recent years.

Scientists haven’t pinpointed an exact cause of colony collapse, which became apparent in 2006 and in some areas has affected up to 50 percent of bee colonies. Researchers believe the widespread die-off, which has slowed since 2010, could be due to infections, mites, malnutrition or pesticides—or a combination of factors.

Willey, according to the project website, has 24 years of experience painting murals, in addition to more traditional works on canvas. The first honeybee mural went up on the walls of the Harold P. Curtis Honey Company, in Lavelle, FL. One piece is at the headquarters of Burt’s Bees, in Durham, NC. The upcoming addition of his eighth mural, in Carrboro, NC, will likely bring the number of bees painted to more than 900.

Beyond colony collapse, Willey also points out that the way honeybees live could be a model for interaction in the human world.

“Honeybees within the hive ‘think’ collectively,” Willey explains on his website. In human societies, too, “the health and success of the individual relies heavily on the connections within the group—and consequently between the groups within the greater society.”