The earthquake that struck central Italy in the early morning hours Wednesday (Aug. 23) has left hundreds of casualties and widespread destruction to historic churches, frescoes and monuments throughout the region.

A 6.2-magnitude quake hit less than 100 miles northeast of Rome; its epicenter in the medieval village known as Amatrice, according to news reports and officials.

Towns and villages in three regions—Umbria, Lazio and Marche—were reduced to rubble by the quake, which could be felt as far away as Bologna and Naples, according to The New York Times.

In the hours that followed, hundreds of aftershocks were felt throughout the mountainous region.

The Italian culture ministry said Wednesday (Aug. 24) it plans to assess the damage to the country’s cultural heritage following the end of the first emergency phase, when saving lives and assisting those affected are most paramount. Meanwhile, art experts fear the loss is great.

Death Toll on the Rise

The death toll surpassed 250 as of Thursday (Aug. 25) afternoon, but officials said the number was likely to climb as rescue and recovery efforts continued. Aftershocks have been widespread and many, hampering rescue efforts, reports said. About 365 people were injured, Reuters reported.

More the 4,000 rescuers were using hands, dogs and machines to dig through the rubble, according to the BBC.

The largest death toll was in the epicenter, Amatrice, with 184 deaths, according to officials.

The Italian health minister said many victims were children and many were tourists, which makes it more difficult to track the deaths.

A 10-year-old girl was pulled from the rubble late Wednesday night after being trapped for nearly 17 hours beneath rubble in the village of Pescara del Tronto, according to the BBC. The mayor of that village said most of the houses there had collapsed.

Historic churches and monuments were severely damaged by the quake.

The destruction was “a true drama, there is a lot that has been lost,” The Guardian reported, citing a Dutch classicist David Rijser. 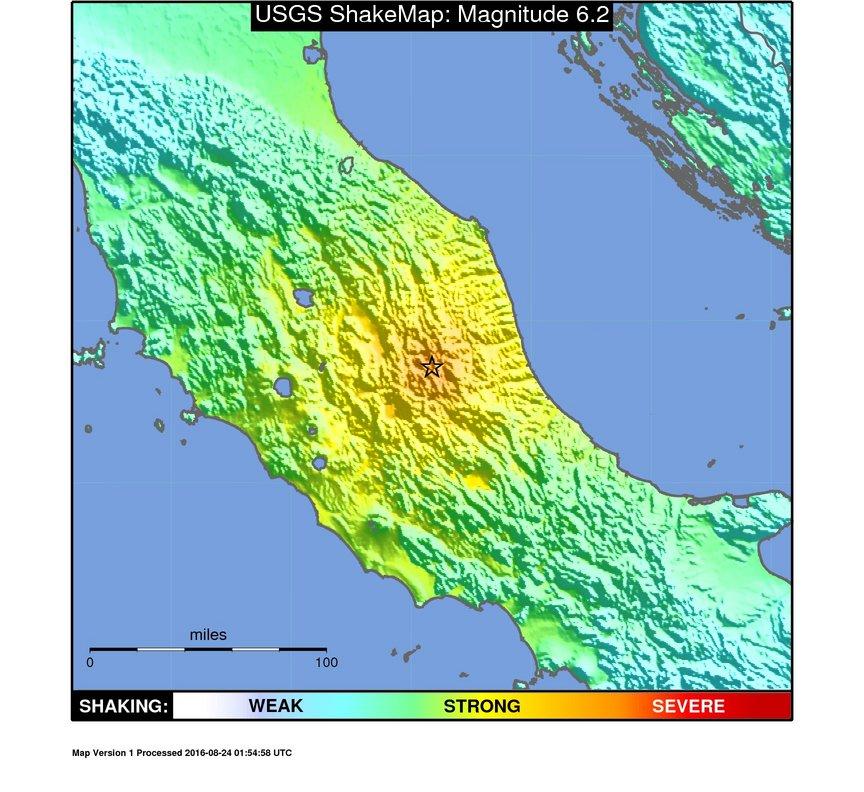 USGS
A 6.2-magnitude quake hit less than 100 miles northeast of Rome; its epicenter in the medieval village known as Amatrice, according to news reports and officials.

Described as one of the most beautiful towns in the country, Amatrice once featured 100 churches filled with frescoes, mosaics and sculptures.

Sergio Piorizzi, the mayor of Amatrice, told reporters that 75 percent of the town had been destroyed and that no building was safe for habitation, forcing many to spend the night outdoors Wednesday.

Half of the facade of the 15th-century church of St. Agostino there has collapsed, The Guardian reported.

Damage to historic buildings in Norcia, the birthplace of St. Benedict, has also been reported, including the 12th-century basilica said to have been built on the foundation of his house.

Parts of Roman walls, a museum housed in a medieval fort, and cracks in the baths at Caracalla in Rome were also reported.

Rebuilding may not be an option for some of the treasured hilltop structures, experts said.

The area is no stranger to earthquakes. A similar, 6.3-magnitude quake rattled the area in April 2009, killing around 300 people and exacting widespread damage to historic buildings. That quake struck L’Aquila, which is about 31 miles from Amatrice.

Italy sits on two fault lines and is one of the most seismically active countries in Europe, Reuters reported.