In what some have described as a “Flint 2.0” situation, at least 1,000 residents of a low-income housing complex built near a former industrial site in East Chicago, IN, will soon be displaced due to high lead levels found in soil around the facility.

City and federal officials say they are working to relocate families who reside in the federally funded West Calumet Housing Complex, just outside of Chicago. 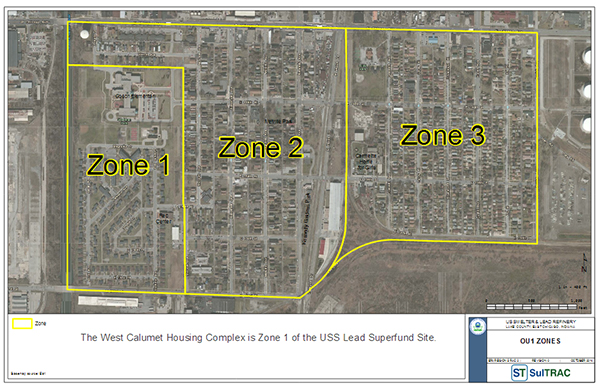 EPA
The West Calumet Housing Complex, along with an elementary school, are located on a priority cleanup site. Contaminants at the site include lead and arsenic.

The apartments were constructed over 40 years ago in a region where a lead refinery, copper smelter and secondary lead smelter operated from at least the early 1900s to 1985, according to authorities. Most of the residents there are African American and Hispanic.

The Environmental Protection Agency designated the area, known as U.S.S. Lead, as a priority cleanup site in 2009 and testing conducted in 2014 showed “alarmingly high” levels of lead in soil around the housing complex, according to reports.

Following those tests the agency had developed a plan to excavate tons of soil from the site; however, despite those determinations, nothing happened until May this year, reports relate, when the EPA released, for the first time, its testing results to the city.

“The results showed the soil at nearly every property in West Calumet exceeded the EPA’s 1,200 ppm threshold for emergency cleanup. At one property, the lead concentration was found to be more than 91,000 ppm,” according to The Times of Northwest Indiana. The newspaper also reported that arsenic levels were seen as high as 567 ppm, noting that arsenic levels of more than 26.4 ppm in residential areas trigger EPA cleanup.

Also in May and June, the EPA posted signs throughout the area warning residents to not let their children play in dirt or mulch and a series of letters were sent to residents, including one from the city informing residents that they needed to temporarily relocate.

In July, the agency covered soil contaminated with high levels of lead and arsenic with top soil and rubber mulch as a temporary solution, according to the Chicago Tribune.

EPA’s on-site coordinator for Region 5 told the Tribune that once those initial tests started coming in showing high levels of lead, the agency began expediting the process and testing interiors of units. The EPA had planned to begin excavating yards in mid-August.

However, city officials want to relocate residents and completely demolish the 364-unit complex. EPA has put excavation plans on hold for now.

On Friday (Aug. 19), the U.S. Department of Housing and Urban Development announced the release of just over $1.9 million to the local housing authority to help relocate the housing complex residents, The Times of Northwest Indiana noted.

Meanwhile, some families have had their children test positive for lead poisoning. The Associated Press reports that of the 400 preliminary blood screenings completed, 29 were high, including 21 children younger than 6.

In addition to the housing complex, at least one elementary school in the area has been shut down over safety concerns over lead in the soil.

Some reports have compared the developments in East Chicago to the Flint, MI, water crisis, which was thrust into national spotlight earlier this year. There, troubling levels of lead were found in the city’s drinking water due to corrosive pipes.