In an effort to help curb the spread of food-borne illness, researchers in Ithaca, NY, are looking at how coatings might contribute to keeping surfaces at production facilities free of contamination between scheduled cleanings.

A team at Cornell University is working with specialized polymer coatings that are more resistant to bacteria and other microbes than the food contact surfaces that are used now, the Institute of Food Technologists (IFT) announced. 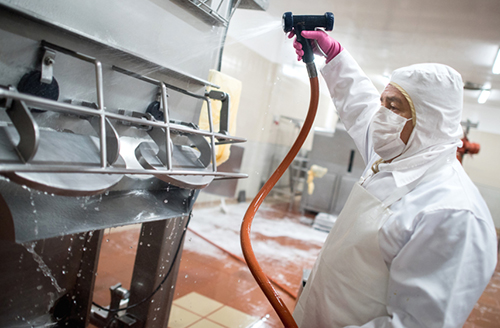 © iStock.com / andresr
Researchers at Cornell say the challenge in developing a polymer coating that can resist microbes in food processing plants is that it must also stand up to acidic and caustic cleaners, temperature extremes and abrasions from scrubbings.

Headquartered in Chicago, IFT is a nonprofit scientific society of professionals engaged in food science, food technology, and related areas in academia, government and industry.

Cornell’s work was addressed as part of IFT16: Where Science Feeds Innovation, the society’s symposium held earlier this summer in Chicago.

Holding Up in Tough Conditions

“Manufacturers already work diligently to keep their facilities clean, but we are creating materials that are even less likely to harbor bad bugs,” says Julie Goddard, an associate professor in the department of food science at Cornell.

“We have designed new polymer coatings that can be applied to food processing surfaces that resist microbial adhesion and can actually inactivate any microbes that do adhere, preventing them from growing and potentially contaminating our food supply.”

Goddard also explains that designing coatings that are both durable and effective in these types of applications can be a daunting task.

“It’s a hard life for the equipment used in food production facilities because the coatings have to hold up to acidic and caustic cleaners, temperature extremes and abrasions from scrubbings,” she says.

“It’s a huge challenge to find coatings that will work under these extreme conditions.”

But, she says, the team’s new coating works on resisting bacteria in several different ways and has been shown to inactivate 99.999 percent of Listeria monocytogenes.

Listeria monocytogenes, a species of pathogenic bacteria that causes the listeriosis infection, is capable of surviving in the presence or absence of oxygen. It “is a significant threat to food safety,” Goddard notes.

Goddard anticipates that their coating will find use in other areas of food processing plants as well. Objects like doorknobs, HVAC vents and drains are among the target surfaces for the coating, as they can harbor microorganisms that make food spoil faster or can make people ill.

Another application for these coatings may be on handling and harvest equipment for fruits and vegetables, she says.

Moreover, in addition to being important to food safety, Goddard notes, coatings like this can help reduce the massive amount of food that is wasted due to spoilage microbes.

The coatings are still being researched but may be available commercially within a few years, the team reports.