Painting of the Sault Ste. Marie International Bridge, which spans the St. Marys River between the United States and Canada, was scheduled to begin this year, but is one of a handful of bridge projects tapped to be rescheduled in an effort to take advantage of new technology and save money, the International Bridge Administration announced Friday (Aug. 19). 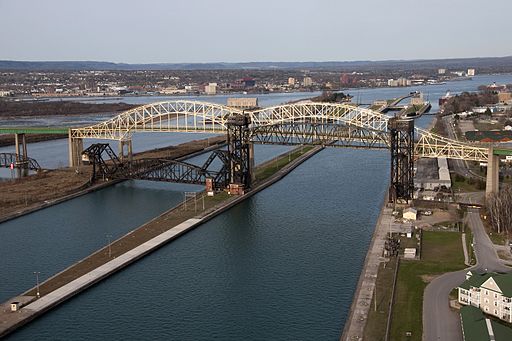 By US Army Corps of Engineers, Richard McDonald / Public domain via Wikimedia Commons
The International Bridge Administration has opted to defer the painting project planned for 2016 for another year while it tests an alternative coating option for major painting and maintenance painting projects.

"We are also reviewing the bridge’s overall business plan with regard to timing of future capital projects as we start on more intensive preventive maintenance,” IBA General Manager Peter Petainen said.

The Sault Ste. Marie Bridge Authority (SSMBA) board, the bi-national body supervising operations of the International Bridge, received notice of these changes at a meeting Thursday (Aug. 18).

Although painting of the bridge’s Canadian arch was slated for 2016, Petainen explained that higher-than-expected bids have led them to retender bids on the project for 2017.

The SSMBA learned that factors such as containment costs (the top half of the arch reportedly contains lead paint) and customs clearance to access the work site led to the higher-than-anticipated quotes. A similar job on the Mackinac Bridge in Michigan, about 56 miles to the south of the International Bridge, cost 50 percent less, officials said.

”We are delaying several capital projects and looking for more cost-effective ways to complete these projects with our own staff,” Petainen explained.

“We plan to take advantage of opportunities to save money and integrate new technologies,” he added.

Deferral of the painting project, as well as planned replacement of sliding plate bearings and rocker arms will not affect bridge safety, Petainen clarified.

“We’re being proactive with regard to both of these projects,” he told the Star, adding that both will be done before their recommended replacement.

Among the areas being reconsidered, IBA officials are investigating what they see as “promising new alternative coatings” for use on future major painting projects and maintenance painting efforts for the 54-year-old structure.

A test of a new coating system will be completed this year on several spans on the south side of the bridge, the IBA said.

Bridge workers will not remove all of the paint, the Star reported. Rather, they intend to pressure wash the structure “and use one application of the coating system instead of a coat of primer, zinc and top coat,” it wrote.

Petainen said he expects this will help work to be completed 60 percent faster.

The exact system was not identified but Petainen notes it has been used on approximately 4,000 bridges in North America and is approved for application on top of existing paint by the Ontario Ministry of Transportation.

“It was new to us,” he said. “We went from pessimistic to cautiously optimistic.”

Bridge engineer Karl Hansen told the area paper that he has inspected several bridges in southern Ontario that use the same coating system, including one rail bridge that shows no evidence of rust 23 years later.

The product’s durability allowed major paint projects to be deferred “for a very significant period of time,” said Petainen.

Bridge crews will keep an eye on the test application in the fall and spring, and if acceptable, the coating will be applied to the arch and curb rails next year. They will verify rust does not appear at steel joints before continuing the application, the Star stated.

In July bridge staff completed a flood coat sealing of the Canadian arch concrete deck, an example of the IBA’s shift to an asset-management and preventive maintenance approach, the group said.

The flood coat is an epoxy sealant that fills all cracks in the deck, extending the surface life as well as improving road traction when used with a granular overlay, it explained.

Sealing cracks is meant to prevent water from seeping into the concrete and causing the rebar to rust, which could lead to swelling and breakage of the bridge deck, the paper noted.

Previously, the epoxy sealant was only applied where staff saw visible cracks, it added.

Officials expect the flood coat sealant will last at least five years, and other deck locations on the bridge are scheduled to receive the flood coat as well.