A Los Angeles architect is taking on a new project that might seem unexpected coming from a former Frank Gehry partner: Filling a largely vacant sector of Detroit with corrugated-steel “huts.”

Edwin Chan, who spent more than 25 years working at Gehry’s firm before striking out on his own with EC3, has been enlisted to help with True North, a development of simple, hangarlike homes called Quonset huts in Detroit’s neighborhoods of Woodbridge and Core City.

The first prototype True North huts were created by local firm Studio Detroit, according to the Associated Press. Chan is working with ABOVE THE FOLD, a Detroit company that describes its business as "representing international AEC professionals and companies, connecting them to clients, collaborators and press." The project's developer held community engagement event in July to showcase the prototype huts to local residents. 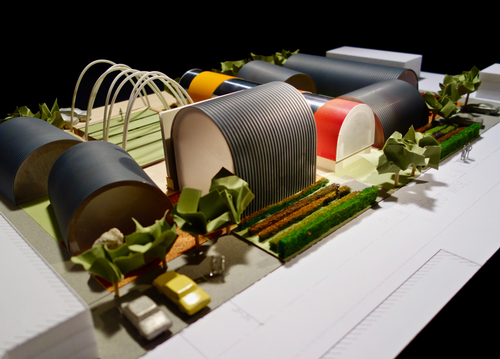 Edwin Chan/EC3
Edwin Chan, who spent more than 25 years working at Frank Gehry’s firm before striking out on his own with EC3, has been enlisted to help with True North, a development of simple, hangarlike homes called Quonset huts in Detroit. (Architect's model shown.)

The huts, as reported by The Detroit News, will range in size from 600 to 1,100 square feet, and include basic residential features (bathroom, kitchen, plumbing, etc.). The development will include one duplex, according to the developers. There will also be gardens with native plants.

Affordability is the goal: According to ABOVE THE FOLD, "rents will equate to approximately half of the cost of other newly constructed projects throughout the city."

The True North team says Chan was commissioned by a New York-based developer, as yet anonymous, who is bankrolling the development. The developer asked for small, colorful Quonset huts for the new “village.” The developer was inspired in part by a photo of Quonset huts in post-WWII Berlin.

“Not only did I love the design, I happened to be driving in the area surrounding the site [of True North] and saw an original, abandoned Quonset hut," the developer said in a press release. "It immediately struck me that the simplicity and prowess of the form could be elevated through design to meet the desires and demands of how we live today."

While Detroit has suffered recently after blows to the U.S. auto industry, which has historically been centered around the Midwestern city, it’s the center of a lot of design chatter today, according to the News.

Late last year, it was named a United Nations Educational, Scientific and Cultural Organization City of Design, and was the subject of a design exhibit at this year’s Venice Bienniale.

The Quonset hut represents simplicity and austerity in architecture, but also provides a canvas for Chan’s creative vision in this case. The structure was developed by the U.S. military during WWII, and developed for different military and civilian uses throughout the 20th century.

More recently, the Quonset design has served as a basis for more varied structures.

Chan’s work with EC3 has included completed interior projects for art installation spaces, and concept designs for everything from residential and commercial buildings to a traveling museum centering on climate change.

From 1985 until 2011, Chan was a design partner with Gehry Partners, working on projects including Hong Kong’s Maggie Center, the Danish Cancer Center and Paris’s Fondation Louis Vuitton, an art museum with Gehry’s signature touch.

The Detroit project is less about architectural concept and more about creating spaces to best serve people.

“This is very much about community engagement,” Chan told The Detroit News. “It was a chance to do something in a city that seems on the verge of another transformation.”

Editor's note: An earlier version of this story mistakenly referred in one case to Edwin Chan's firm incorrectly; it is called EC3.