Hot pink is not a color most people would associate with the National Aeronautics and Space Administration, but it happens to be the hue of a special paint the agency relies on when it comes to understanding performance characteristics of a new aircraft design.

For the past 25 years, NASA engineers have used a bright pink pressure-sensitive paint (PSP) on models being tested in wind tunnels. 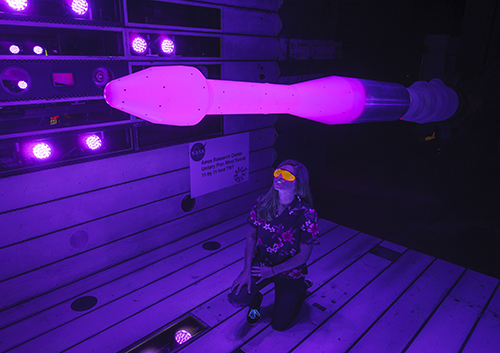 With the information collected through the use of PSPs, NASA hopes to identify new aircraft designs that could cut fuel use in half, pollution by some 75 percent and noise to nearly one-eighth of what it is today, the agency explains.

Engineers need to know how pressure is distributed across an airplane’s surfaces as it moves through the air so they can ensure, among many other critical variables, that they understand the loads the vehicle is experiencing in certain conditions, NASA says.

When it comes to reading these pressures in a wind tunnel, PSP has an advantage over traditional methods, such as pressure taps, because it takes up much less space.

“PSP is great because as long as you can apply paint to the area you want to test, illuminate it with a lamp, and view it with a camera, you can gather data you might not otherwise be able to get,” said Nettie Roozeboom, an aerospace engineer with NASA’s Ames Research Center in California.

Pressure taps, on the other hand, are little plastic tubes that are strung through the model’s interior up to the surface through a small hole in key places.

“The wing struts in particular were very thin, and it was difficult to machine taps where the wing met the fuselage, so PSP really was the ideal solution,” Roozeboom said.

“The challenge is you can only install so many of these taps, otherwise your whole model becomes one big pressure tap,” Roozeboom said. “And in some models, there just isn’t enough room inside the model to accommodate the taps.”

One example the agency cites is its recent tests of a transonic truss-braced wing aircraft design, part of Boeing’s Subsonic Ultra Green Aircraft Research project. The model, it says, included parts that were just too small to record air pressure by any way other than the PSP.

When prepping a model for wind tunnel testing, engineers spray it with a thin coat—about one-and-a-half thousandths of an inch thick—of the special paint and allow it to dry, NASA says.

Next, the model is placed in the wind tunnel, which is set up with blue LED lights and special black-and-white cameras that record the test.

As air flows across the model, and different surface areas of the model experience a range of air pressures, the blue LED light stimulates molecules known as luminophores within the paint, causing them to fluoresce, or shine.

Because of the nature of the paint chemistry, oxygen molecules “quench” the luminophores, the agency explains, and allow it to interpret the distribution of pressure. High-pressure areas have more oxygen, which causes the pink to have a dimmer glow in that area. Lower- pressure areas have less oxygen, so the pink shines brighter.

The camera captures the difference in fluorescence, and the black-and-white images are then used for analysis. The intensity of the different shades of gray are converted to a color scale indicating the varying pressure levels, NASA says.

According to NASA, the idea of relating the luminescent properties of a coating to changing pressure levels was first developed in the early 20th century. German scientist Hans Kautsky had identified the connection between luminescence intensity and oxygen by 1935.

During the 1960s the concept found its way into medicine, and by the 1980s, a Boeing researcher at the University of Washington further developed the concept for use in aviation. It was also there that the use of PSP in a wind tunnel was successfully demonstrated.

NASA joined the story not long after, and by 1989 former astronaut Janet Kavandi, then a Ph.D. chemistry student at the university, joined the team of researchers working on PSPs with the agency.

Kavandi and the team took lighting, cameras and a painted wing segment to try out in a wind tunnel at the Ames Research Center, where they proved that the concept worked.

PSPs Today and in the Future

Now, NASA uses PSP as a research tool in the wind tunnels at Ames, Glenn Research Center in Ohio, and Langley Research Center in Virginia, it says. Its engineers continue to look for ways to make PSP even more effective for testing both aeronautical and space vehicles.

Roozeboom suggests that the next step is to work on a new version of the paint in which the luminophore molecules get excited faster and are less sensitive to temperature.

Known as Unsteady PSP, the paint would reveal changes in pressure at the microsecond level, NASA explains, providing a more detailed look at what is happening on the surface of an aircraft or launch vehicle being subjected to high stress during a high-speed flight or launch.

The distinctive color, however, will remain the same.