Investigations are underway to determine what led a painter to fall 50 feet to his death Monday (Aug. 15) while at work on a water tower project.

The painter, identified as Adilson Vozniak, 37, of Newark, was working with a crew to sandblast and paint a municipal water tower located behind Morris Knolls High School in Denville Township, NJ, the Daily Record reported Tuesday (Aug. 16).

Vozniak, an employee of Cherry Hill-based Allied Painting Inc., fell about 40 to 50 feet from the tower around 2:45 p.m., Denville Capt. Paul Nigro told the Parsippany Patch. 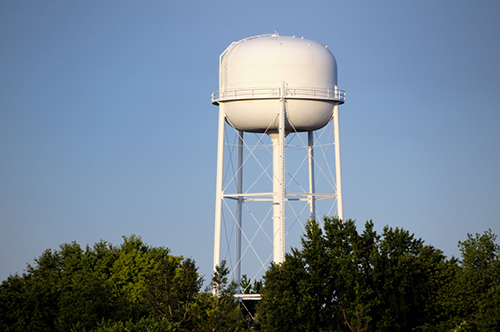 © iStock.com / Anthony Seebaran
A painter reportedly fell to his death Monday (Aug. 15) while working with a crew to sandblast and paint a municipal water tower in Denville Township, NJ (not shown).

A coworker reportedly called 911 after Vozniak sustained injuries in the fall. He was transported to a local hospital, where he was pronounced dead, sources said.

An employee reached by phone Wednesday (Aug. 17) indicated that the company has no comment at this time.

The incident is under investigation by both Occupational Safety and Health Administration and Denville Police. Authorities are said to be treating it as an accident.

OSHA has cited Allied Painting on multiple occasions in the past for safety violations that included exposure to falls, NJ.com noted.

That work was performed on a catenary scaffold beneath the bridge, and workers used caged ladders to climb down the scaffold. However, obstructions to access ladders and insufficient heights for temporary railings between ladders and the permanent bridge railing exposed workers to fall hazards of more than 100 feet, OSHA alleged.

Allied Painting had contested the citations and penalties to the independent Occupational Safety and Health Review Commission at the time, and the OSHA site shows that the fall violations are still under contest.

An earlier closed case with no listed citations or fines shows the company was inspected on the Braga Bridge project in November 2013 after OSHA received a complaint related to fall protection.

OSHA's records also list a closed Sept. 16, 2013, inspection in Delaware launched by a referral. The inspection came after a painter had been injured in a “short fall” from the Delaware Memorial Bridge while painting the substructure of the Delaware-bound span.

In 2004, an Allied Painting employee fell 15 feet into the Delaware River while working on the New Hope-Lambertville Bridge. The worker was not seriously injured.