Paint reported to be coming off the underside of a New York City overpass has caught the attention of a regional chapter of the painters trade union.

Members of District Council 9 of the International Union of Painters and Allied Trades recently joined community residents and legislators beneath an elevated section of FDR Drive to voice concerns about the effects chipping lead paint could have on public health. 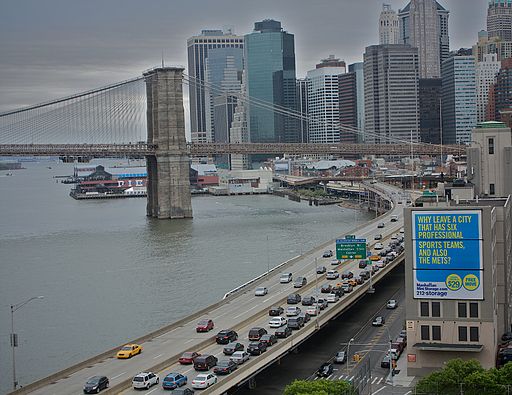 By Ryan Vaarsi / CC BY 2.0 via Wikimedia Commons
Representatives of the international painters union and other concerned citizens reportedly gathered on South Street under FDR Drive to call on transportation officials to remove lead paint they say is falling from the overpass onto the East River waterfront.

FDR Drive, also known as the Franklin D. Roosevelt East River Drive, was built as a scenic highway, running about 9.5 miles along New York’s East River. The freeway is about 60 years old.

Now, lead-based paint is said to be peeling off of the structure and into areas along the waterfront where seniors and children congregate, neighborhood news source DNA info reported Friday (Aug. 12).

The concerned groups gathered Thursday (Aug. 11) to call on both city and state transportation departments to remedy the situation by removing the failing paint from the overpass, arguing that it threatens health and safety on the waterfront.

“This is a public safety issue,” said Davon Lomax, political director of District Council 9 of IUPAT. He explained that fallen paint chips pose a hazard for inhalation or ingestion, particularly for children who might touch the paint chips and ingest paint dust.

“Neighborhood folks are biking, eating, and hanging out around here, and we have lead paint literally falling down,” State Assembly candidate Yuh-Line Niou noted. “We need to make sure the air that we breathe, the water that we drink, and the places we are playing, working, and living are safe.”

Lead poisoning of infants and children can cause lowered intelligence, reading and learning disabilities, impaired hearing, reduced attention span, hyperactivity and behavior problems, according to the EPA. Overexposure to lead in adults is reported to lead to brain damage, as well as gastrointestinal effects, anemia and kidney disease.

Kudos @yuhline & Davon Lomax of @DC9_IUPAT for calling for repairs to FDR & other investments in NYC infrastructure pic.twitter.com/qeT9BaRZL1

Although the overpass does not fall under the purview of the city’s Department of Transportation, according to its representatives, a spokeswoman for the state DOT confirmed that the overpass and the city’s bridges fall within the state agency’s authority.

According to DNA Info, the spokeswoman explained that the structures are regularly inspected, “at least every two years.” The overpass was judged safe as of an August 2014 inspection and is scheduled for another inspection by the end of this month, the news site reported.

This is not the first time citizens have warned of lead hazards under the FDR. In May 1995, environmental health graduate students tested the waste left behind after steel columns under the parkway had been sandblasted, The New York Times reported at the time.

The students determined the lead levels in the parking area beneath the roadway exceeded permissible levels as dictated by public safety standards, and environmental health experts agreed the lead levels posed a serious risk.

However, city and state officials challenged the findings, claiming their own soil and dirt tests showed low lead levels.

"We look to put our resources where there is a significant risk of childhood lead poisoning," Sam Friedman, a spokesman for the city's Health Department, said at the time. "Obviously no lead is good, but the numbers aren't surprising for a parking lot under a bridge."

“The dispute highlights how the definition of a public health hazard can be open to interpretation, even among experts,” the Times wrote.