Fire officials were forced to demolish an industrial paint application facility after it was heavily damaged by fire over the weekend.

The blaze broke out early Saturday (Aug. 13) at L&M Spray Finishers Ltd. in the Leicester City Centre area of the East Midlands region of England, according to the Leicester Mercury newspaper.

Described by news sources as a spray paint factory, area directory listings indicate L&M Spray provided various paints and other coatings for a variety of applications, including paint and cellulose spray services. The company’s website is currently down for maintenance.

People were working in the building before fire crews arrived, but everyone had evacuated and no injuries were reported.

Although the official cause of the fire has yet to be determined, fire officials indicated they believe the cause of the fire was accidental. Additionally, John Greasley, incident commander for Leicestershire Fire Service, told the local paper, "A spray booth unit was involved in [the] fire.”

Sources indicate crews were called to the scene shortly after 10 a.m. and had extinguished the fire by 1:30 p.m. but remained on site afterwards to manage any remaining hot spots. They were also able to keep the fire from spreading to another property, Greasley added.

Heavy black smoke reportedly could be seen from miles away and worried those who lived nearby. A number of area roads had to be shut down due to heavy smoke and poor visibility, sources said, and nearby residents were asked to remain indoors and to keep their windows closed. However, Gerasley noted, “The smoke everyone could see is like smoke from a normal house fire—it is low hazard.”

Some eyewitnesses reported hearing explosions or loud bangs as the fire grew.

Dr. Salem Talib, a science teacher at Nams Tutorial College near the paint facility, was at work when the fire started.

"I did not realize there was a fire until I heard two loud bangs—it was like an explosion," he said, adding that firefighters then asked him to leave the building.

"It was a massive fire originally. The black smoke was so high you could not see the sky,” he explained. “There were massive flames coming out of the roof."

Another nearby worker said the fire set off alarms in his building. Steven George described the scene: "I looked out and could not even see out of the window because of the thick black smoke. On the seventh floor we could see the flames coming out of the roof, and the bricks were falling off the top of the building.

"The smell was like a burnt out motor,” he added. “We were told if we could smell it to leave the building because it could be toxic flames, as it's a paint factory."

Other eyewitnesses described the smell as similar to diesel or rubber.

A building control officer indicated that the building was no longer safe following the fire, the Leicester Mercury later reported.

Greasley indicated that Newline Demolition, also based in Leicester, was brought in to tear down the building and clear the site that same day.

Because the building was likely to contain some hot spots that the fire department couldn’t reach, demolition crews planned to pull the building outwards to allow firefighters access to these areas. 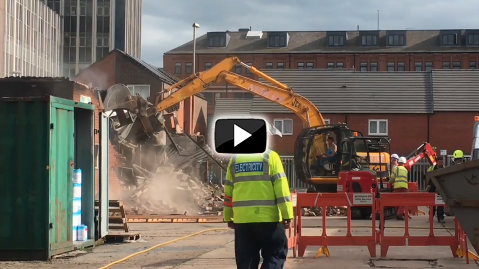 Leicester Mercury
‘Devastated Is an Understatement’

"They will have a machine on site which will pull the building outwards allowing firefighters to extinguish hotspots,” Vince Hyde, watch manager for Central Fire Station, explained.

"The roof has collapsed in, so there are hot spots we can't get to," he added.

David Martin, supervisor at Newline Demolition, indicated that their job was not only to give crews access to dampen hot spots, but also to make the building safe for them.

‘Devastated Is an Understatement’

Marvin Cutkelvin, co-owner and director of L &M Spray, told the Leicester Mercury Monday (Aug. 15) that he was devastated by the sight of the fire, adding that he had sat down and wept while fire crews fought the flames.

"It was very hard to sit there and watch 15 years of hard work go up in flames,” he explained. "Devastated is an understatement to sum up how we feel. This has been my life and the life of my business partner and the staff for years. We have all put in lots and lots of hard work and long hours to build the business up."

L&M Spray employs a staff of 12, and Cutkelvin noted he was glad no one was injured in the blaze. He plans to begin rebuilding the business right away.

"The kind messages of support we have received from all our customers is humbling,” he said. "We have to find another home for our business and quick. We will not let this put us out of business."