The CEO of a New York City steel erection company faces up to 40 years in prison for illegally using a federal minority set-aside program to obtain hundreds of millions of dollars in contracts on the World Trade Center projects, including the Port Authority Transportation Hub.

Following an eight-day trial, a New York jury has convicted Larry Davis, 65, president and CEO of DCM Erectors Inc., and his company, of engaging in a fraudulent scheme to violate the Port Authority of New York and New Jersey’s Minority and Women-Owned Business Enterprise Program. 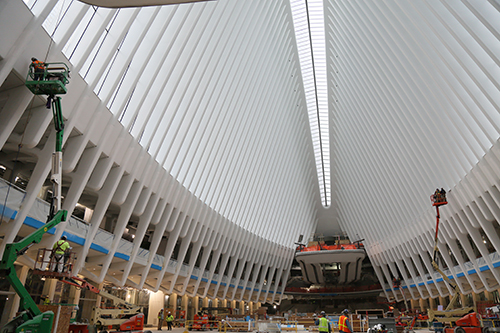 Silverstein Properties Inc.
The 104-story skyscraper known as One World Trade Center opened in 2014 and

“The construction work awarded to Davis came with the obligation to employ minority and women-owned businesses, an obligation that Davis shirked and then lied about,” Manhattan U.S. Attorney Preet Bharara said in a statement Wednesday (Aug. 10). “We cannot allow major public projects—particularly ones on the sacred World Trade Center site—to be built on a foundation of fraud. By its verdict […], the jury of New Yorkers made clear that it will not.”

Davis’ attorney told media outlets that he plans to appeal the verdict.

The U.S. Attorney described the amount of public work involved and how Davis’ scheme worked.

Davis has served as president and CEO of DCM since March 1999, according to case documents. The company, which specializes in steel erection services for large construction projects, was awarded an approximately $256 million contract to work on One World Trade Center in 2007. In 2009, DCM was awarded another $330 million contract for work to be performed on the World Trade Center Port Authority Transportation Hub. Those contracts grew to almost $1 billion, prosecutors said.

Under those contracts, work to be performed included, but was not limited to, structural steel supply and erection, supply and installation of metal decking, drafting and engineering, and surveying, according to the U.S. Attorney.

The Port Authority’s M/WBE Program applied to the World Trade Center Project. The program is designed to ensure that M/WBEs receive work.

Pursuant to the M/WBE Program, all contractors, including contractors such as DCM, were obligated to make good faith efforts to enter into subcontracts with M/WBEs, with a goal of 17 percent of the overall contract amount to be given to M/WBEs (12 percent for MBEs and five percent for WBEs).

To satisfy the requirement, prosecutors said Davis engaged in a fraudulent scheme in which he caused DCM to claim that certain work was performed by a minority-owned business, Solera/DCM Joint Venture LLC (“Solera/DCM,”) and a woman-owned business, GLS Enterprises Inc. (“GLS”).

However, prosecutors said Davis falsified business documents to make it appear as though DCM was in compliance, when, "in truth and in fact, DCM itself performed such work or arranged for such work to be performed by other non-M/WBE contractors."

During trial, Johnny Garcia, the minority subcontractor and owner of Solera Construction Inc., said he helped Davis land the lucrative contracts and received $2 million for his role. He testified that he did “basically nothing” in exchange for the money.

Davis is scheduled for sentencing in November.

The 104-story One World Trade Center was completed in November 2014. The Transit Hub opened in March this year.

“Through a systemic practice, Tishman Construction bilked its clients by charging them for unworked time and at rates higher than those bargained for by their clients,” U.S. Attorney Robert L. Capers said in a statement at the time.

Tishman agreed to pay more than $20 million in victim restitution and federal penalties to settle mail and wire fraud conspiracy charges in the case. Tishman’s remedial measures included the hiring of a compliance director; adopting a new code of conduct; and updating time-sheet recording and billing policies.

The company was also the builder of the original Twin Towers in 1973.