At least one former worker has called into question the safety of an oil pipeline being built in North Dakota, but the company building it says the charges are coming from disgruntled ex-employees who are upset over being fired.

The Forum News Service reported Friday (Aug. 5) that former contractor Kenny Crase told North Dakota’s Public Service Commission he was made to skip a final external coating inspection before a section of the Sacagawea Pipeline was installed under Lake Sakakawea (sometimes spelled "Sacagawea"). 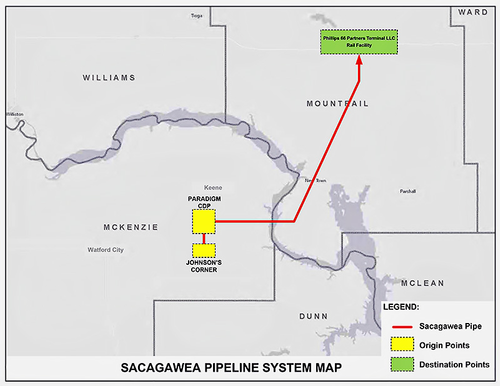 Diagrams: Sacagawea Pipeline Company
The Sacagawea pipeline will be 91 miles long when complete, and consists of 16-inch steel pipe.

An attorney filed the complaint with the PSC last Tuesday (Aug. 2), on behalf of the Laborers District Council of Minnesota and North Dakota, which represents Crase. It alleges that Boyd & Co., a non-union contractor building the pipeline for Sacagawea Pipeline Company LLC, violated federal pipeline regulations, which state that external pipe coatings must be inspected “just prior to lowering the pipe into the ditch or submerging the pipe,” and repairs must be made to any problematic areas.

In the complaint, Crase, who says he was hired by Boyd in March of this year and “let go” in July, describes “a lot of headaches and delays” in the pipeline construction project. He notes that during initial inspections of the pipeline, a number of “holidays,” areas of discontinuity in the coating, were found.

Crase says that prior to the pipeline being installed, he and his crew were told by an inspector to reapply external coatings to ensure a uniform coat, but then they were told by a supervisor to go home for the evening, and they were prevented from inspecting and applying coatings the next morning before the “pull.”

Situating poorly coated steel pipeline under a lake could expose the pipe to corrosion, and increase the risk for a rupture that sends oil into the lake.

“Pulling a pipe that hadn’t been properly inspected under Lake Sakagawea (sic) was probably the worst decision I’ve ever seen a pipeline contractor make,” he writes in the affidavit.

Crase, who says he is a former inspector himself, says he and his crew were let go immediately after the pipeline was pulled, allegedly because a supervisor said they took too long applying the coating. The Forum News Service reports that the PSC also received an anonymous tip indicating a similar complaint about the pipeline; Crase says he did not place that call.

Crase’s affidavit is supplemented by photos and descriptions supplied by Evan Whiteford, a marketing representative with the Laborers International Union who documents pipeline practices in the region.

Whiteford’s photos document pipeline laid on the ground (where coatings can be scratched by rocks, he notes); an excavator working near power lines without a spotter; a site obstructing a road without adequate signage warning drivers; and sites where fences and barriers protecting wetlands have been run over by equipment or allowed to fall over.

The photos paint a picture, Whiteford says, of a “clear failure to employ pipeline construction best practices” on Boyd’s part.

According to the Forum News Service, Boyd & Co. owner Mike Boyd says that the coating crew Crase was a part of did substandard work, and that’s why they were fired. He says the allegations are simply false.

A request for comment from Sacagawea Pipeline Company was not immediately returned Monday (Aug. 8).

According to Forum, the Pipeline and Hazardous Materials Safety Administration, the federal body that governs pipelines, is investigating the accusations.

The Sacagawea Pipeline is set to take oil from Johnson’s Corner, in McKenzie County, ND, to a rail transport facility in Mountrail County. According to its owner, it will be 91 miles long when complete, and consists of 16-inch steel pipe.

The pass under Lake Sakakawea is made at one of the lake’s narrowest points, according to the company behind the pipeline, a joint venture between Paradigm Energy Partners LLC, Phillips 66 Partners LP, and Grey Wolf Midstream LLC.

The pipeline route under the water was bored using the horizontal directional drilling method. It crosses under the lake at a width of about 7,000 feet, and runs about 100 feet below the bed of the lake. The plan was approved in January.

According to the Forum News Service, the concerns about the pipeline will likely be discussed at an Aug. 17 meeting of the PSC.