The Missouri Department of Transportation is crediting the painting and surface preparation process with uncovering unforeseen deficiencies in a bridge over the Missouri River in the state’s capital.

MoDOT officials had expected to reopen the westbound Route 54/63 bridge in Jefferson City by the end of August, when the paint work was slated for completion.

However, during the surface preparation process, painting contractors noted the need for structural repairs, which will now delay the reopening for an unspecified period of time, MoDOT announced. 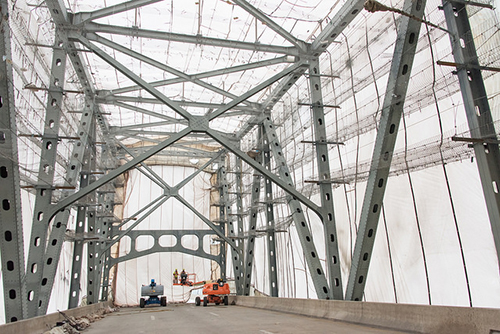 Photos: Missouri Department of Transportation
Unforeseen structural repairs uncovered during the painting process will delay the opening of the westbound Route 54/63 bridge over the Missouri River in Jefferson City, according to MoDOT officials.

“As the contractor worked to remove the old paint, the blasting process revealed a structure that was not in as good of condition as we expected,” said David Silvester, district engineer for MoDOT’s Central District.

“Because these repairs will take extra time to address, we have no choice but to delay the opening of the bridge,” he added.

Silvester explained that as crews blasted old paint off the structure, they discovered a “larger number of deteriorated rivets” that need to be replaced.

“It’s not unusual to find unexpected problems on a bridge this old and a project this complicated,” said State Bridge Engineer Dennis Heckman.

Heckman also said at a news conference that more rust spots than anticipated require repair, the local News Tribune reported. Pigeon droppings from flocks nesting on the bridge are blamed for concealing some of the rusty spots.

He noted that regular inspections often don't show the extensive nature of hidden rust but said that engineers know it happens and make an “experienced-based educated guess” as to the nature of the problem is before blasting begins to remove paint and droppings.

The state’s bridges are inspected every two years, he noted, adding that those regular inspections led to the work currently being done on the structure.

Heckman also noted that the nature of needed repairs does not make the bridge structurally unsound, nor would it have led to a collapse.

MoDOT said it has since renegotiated its agreement with the contractor, Saffo Inc. of Wilmington, NC, to include these and other structural repairs. The additional repair work is expected to add about $500,000 to the $7 million project, according to Patty Lemongelli, the Central District's construction and materials engineer.

Lemongelli added that Saffo "has been doing a great job in the repairs and painting of this structure. We have the utmost confidence in them that they will continue to work diligently."

Officials noted that because the bridge is already closed for the painting process and the surfaces are clean, this is the best time to address the needed repairs.

And although the department is disappointed that the target completion date is no longer achievable, Lemongelli noted "we'd be even more disappointed if we didn't walk away with a good product.

She added that taking the time to tackle the repairs now will deliver "not only a well-painted structure but also a structurally repaired bridge that's going to last for several more years."

Silvester hesitated to offer a new completion date because it remains unclear whether the contractor will encounter additional repairs as the blasting and repair process continues. However, speculation suggests mid to late October as a possibility.

“Due to the unexpected repairs we’ve already experienced, we are unsure what we might find going forward,” Silvester said. “We know the closure will extend into the school year and beyond Labor Day. We need to allow the contractor the time needed to get the job done right.”

Silvester noted the bridge work is an important investment in preserving the state’s transportation infrastructure. If the bridge were not properly maintained, it would eventually have to be replaced at an estimated cost of $100 million, he said. With the state’s long-term insufficient funding challenge, finding the money for a project that size would be difficult, MoDOT indicated.

“The structure is sound and the maintenance work we’re performing is necessary to maintain the bridge and extend its life for another 20 to 30 years,” Silvester said.

“Major river bridges are a big investment on our system, and it’s important that we maintain that investment.”