A record-breaking bridge in Scandinavia appears to have a timeline to match when it comes to painting the monumental span.

The Øresund Bridge, a combined rail and roadway bridge, is the longest such structure in Europe, connecting Malmö, Sweden, and Copenhagen, Denmark, across the Øresund strait. 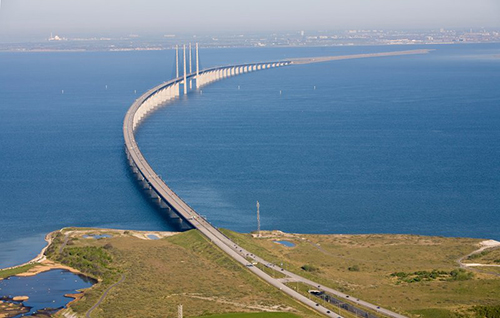 Drago Prvulovic via Öresund Bridge Consortium
Officials anticipate it will take a period of 15 years to repaint the 300,000 square meters of steel on the Øresund Bridge, the longest combined rail and roadway bridge in Europe.

It travels nearly 8 kilometers (5 miles) from the Swedish coast to an artificial island, Peberholm, in the middle of the strait. There, the bridge appears to dip under the surface, where the crossing is completed by the 4-kilometer (2.5-mile) Drogden Tunnel from Peberholm to the Danish island of Amager.

While it only took four years to build the bridge, officials estimate it could take up to 15 years to give the structure a fresh coat of paint.

Given that the bridge opened in July 2000, more than a decade of use and exposure to the elements mean it’s time for the structure to get a new protective coating.

A total of 300,000 square meters of steel are slated to get two new layers of paint for color and corrosion protection, according to Sweden’s English-language news site, The Local.

Authorities anticipate that work to paint the 8-kilometer-long bridge portion of the crossing would begin in 2019 and continue through 2032.

And it seems that timeline is devoted fully to paint application.

“We’ve done some repair painting when needed, so as a result none of the layers need to be removed, we will only paint two new layers on top,” he explained.

Despite the benefits the paint condition brings, the painters still have a challenge ahead of them. The working conditions on site will be harsher than those during the original application.

Most of the structural elements of the bridge, including the bridge piers and bridge spans, were built on land and towed out to the bridge alignment by a large floating crane.

As such, the original five layers were applied indoors before the bridge was assembled, The Local points out, while these newest coats will be done on the structure itself.

The work environment includes a noisy, busy highway (an estimated 17,000 cars pass over the bridge each day, according to Atlas Obscura) and trains rocketing past painters at speeds of 200 kilometers an hour.

Weather conditions are also likely to be unfavorable, as the span is situated in a rainy region, The Local adds.