The Wisconsin shipyard accused of exposing workers to toxic levels of lead while refurbishing a freighter on site has been cited for 39 violations and is facing nearly $1.4 million in fines based on federal health and safety inspectors’ findings.

The U.S. Department of Labor’s Occupational Safety and Health Administration determined 14 workers at Fraser Shipyards, located in Superior, had lead levels up to 20 times the exposure limit, the agency announced Monday (Aug. 1).

It also found workers were allegedly exposed to other heavy metals and asbestos, and that the company failed to have programs in place to monitor, protect or train employees regarding lead exposure.

On Friday (July 29), OSHA proposed $1,395,000 in penalties for the shipyard operator. The 94-page citation document can be viewed here. 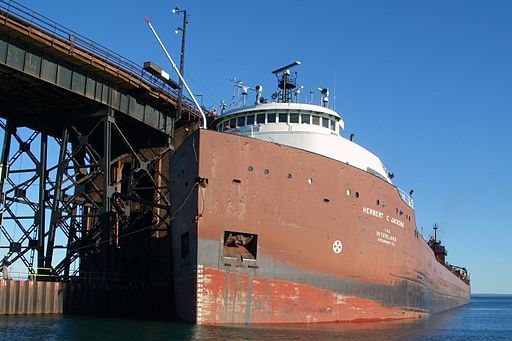 By p.Gordon / CC BY 2.0 via Wikimedia Commons
On July 29, OSHA proposed $1,395,000 in penalties for Superior, WI-based Fraser Shipyards, after determining that the operator allegedly overexposed workers to lead and other heavy metals during the retrofitting of the 57-year-old Herbert C. Jackson.

“Fraser ignored federal regulations, its own corporate safety manuals and worker concerns,” said Ken Atha, OSHA’s regional administrator in Chicago. “Such behavior is unacceptable. No worker should be put at risk from exposure to hazards that can cause permanent health issues to meet a contract deadline.”

Earlier this year, an OSHA hazardous materials investigation confirmed the presence of lead at the Superior-based Fraser Shipyards after complaints of unsafe working conditions had been filed with the agency.

The paint in question was found on the interior of the Herbert C. Jackson, a 690-foot Great Lakes bulk carrier ship, which was the target of a major re-powering project that began in January. Interlake Steamship Company of Middleburg Heights, OH, had contracted Fraser to modernize the ship within six months under a $10 million contract.

In addition to lead, the investigation also looked at levels of hexavalent chromium, which can be generated during welding on stainless steel or metal coated with chromate paint, sources said.

Immediately upon OSHA’s notification, the company alerted employees, halted all work on the affected areas, hired a remediation organization to remove lead paint in the areas that will be disturbed and provided free lead level screenings to employees.

In May, shipyard worker James Holder, 48, filed a lawsuit against the Wisconsin facility, seeking a minimum of $75,000 in damages for alleged lead poisoning and exposure to other toxins in the workplace.

Based on its findings from the investigation, which opened in February, OSHA determined Fraser Shipyards’ management knew of the presence of lead and asbestos throughout the 57-year-old vessel.

However, with the ship’s arrival in December 2015, the contract required the company to meet specific deadlines to get the vessel back in service for the summer iron ore shipping season, the agency noted.

“Fraser Shipyards accepted a contract with a very low profit margin and penalties for delayed completion, but could not meet the schedule without endangering its workers,” said Dr. David Michaels, assistant secretary of labor for Occupational Safety and Health.

“This employer was unwilling to pay the necessary costs to protect employees from lead exposure,” Michaels added. “When companies prioritize profits and deadlines over the health and safety of their workforce, it is the workers who pay the price. Law-breaking employers must be held accountable for their unlawful behavior.”

Overexposure to lead is reported to lead to brain damage, as well as gastrointestinal effects, anemia and kidney disease.

They also determined employees performed demolition in several areas of the ship, including cutting into piping and equipment, without being made aware of the presence of asbestos. Exposure to asbestos is said to increase the risk of lung cancer and mesothelioma, a cancer of the lining of the lungs and abdomen.

Fraser also failed to conduct required medical evaluations and exposure monitoring for employees, according to the agency.

The inspectors also said that Fraser failed to:

Following its investigation, OSHA cited Fraser Shipyards for 14 willful egregious health violations, one for each instance of overexposing a worker to lead.

It also cited five willful violations for failing to conduct monitoring to assess employee exposure to lead, failing to implement a lead compliance program or a respiratory protection program for lead, and for failing to provide training on lead and asbestos hazards.

The agency also issued 10 serious violations to the company and placed Fraser in its Severe Violator Enforcement Program for failing to address safety and health hazards.

By OSHA’s definitions, a willful violation one in which the employer either knowingly fails to comply with a legal requirement (purposeful disregard) or acts with plain indifference to employee safety. A serious violation is one in which the workplace hazard could cause an accident or illness that would most likely result in death or serious physical harm, unless the employer did not know or could not have known of the violation.

According to the agency, this is not first time federal inspectors have found workplace hazards at Fraser. OSHA cited the shipyards for exposing workers to asbestos hazards in 2000 and for multiple lead violations in 1993.

Established in 1889, Fraser offers full shipyard services at its facility on Lake Superior. Capstan Corporation, a holding company based in Duluth, MN, owns the shipyards. At the time of the 2016 inspection, Fraser had a seasonal workforce of about 190 employees.

The company has 15 business days from receipt of its citations and penalties to comply, request an informal conference with OSHA’s area director, or contest the findings before the independent Occupational Safety and Health Review Commission.