When it comes to construction for the 2022 Winter Olympics, host city Beijing is keeping to the theme, even with a new bridge.

Architectural studio Penda and engineering firm Arup partnered on a bridge concept that features the iconic Olympic rings in their design proposal. 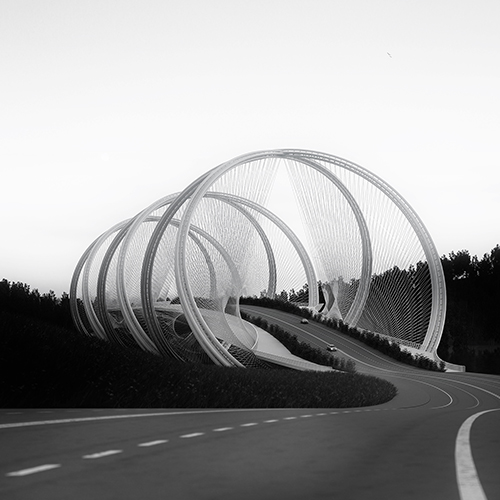 Photos: Penda
Architecture studio Penda and engineering firm Arup took inspiration from the Olympic rings symbol when coming up with their concept for a Beijing bridge to be built to coincide with the city's hosting the 2022 Winter Olympics.

If approved, the San Shan Bridge (or “Three Mountains Bridge” in English) will be an important part of Beijing’s infrastructure program for the Olympic Winter Games 2022, Penda announced.

The structure will span the Gui River and act as a gateway between the city center and the town of Zhangjiakou, where all major outdoor competitions at the Beijing Olympics are being held. In essence, competitors and visitors will be “entering the rings” on their way to the games, the studio explains.

The studio took its inspiration for the design from the undulating hills surrounding the bridge site (the name San Shan/Three Mountains describes both its form and setting) as well as the symbolism behind the Olympic logo—five interlaced rings of equal dimensions representing a union of five continents.

The main structure of the bridge will feature a series of 300-foot-tall steel rings connecting at their highest and lowest points, the studio says. These rings will serves as the main structural element from which high-strength steel cables will suspend the 452-meter-long bridge deck.

“We really wanted to redefine the suspension bridge,” Chris Precht, co-founder of Penda, told Wired. Because of the way the rings and cables will stabilize the bridge from the top, bottom and sides, he added that it’s helpful to reference a bicycle wheel when considering how the ring-cable-deck setup looks.

Each of the rings, which tilt at 45-degree angles toward each other in pairs, serves as the rim in Precht’s bicycle-wheel comparison, connecting 100 cables to the four-lane bridge deck. In turn, the deck and cables serve as the hub and spokes of the wheel. “That’s what really stabilizes the bridge,” he said.

Three sets of cross-connected arch-like steel structures, with a maximum span of 95 meters, will form a “pre-stressed double helix,” Penda says, intersecting and providing support for each other at the bottom and top. “The helix is designed and engineered to be as slender as possible and positioned to offer the best structural performance,” it says.

The steel cables supporting the bridge deck are designed to connect to the arches in a cross-weave pattern.

The structure also shares characteristics of rollercoaster construction, the studio notes, as the spatial arches will be built from tubular stainless-steel struts. Each component of the arch will be composed of five steel tubes that are connected by batten plates and carry the loads to its solid foundation platforms.

“Although each member of the arch is twisted, it is stabilized by the pre-tension of the cable from buckling under compressive loads,” Penda adds.

“The longitudinal stiffness of the bridge is largely enhanced by the cross-connected nature of the cables to resist the dynamic load of the vehicles,” it explains.

Because of the double-helix pattern, the bridge is expected to require five times less steel than a conventional box girder bridge, the studio notes.

It is not the shape of the bridge alone that will connect it to the hilly landscape around it. Rows of hedges and trees will separate the vehicle and pedestrian lanes. Penda sees this feature as adding to the bridge’s function as a “public space” in addition to enhancing safety.

“The San Shan Bridge is an outcome of a combined effort between Penda as an architect and engineers to streamline a design which is based on a connection of formal principles and structural innovations,” the studio says.

“Through this shared effort it is possible to design a unique structural form that can become a symbol for [the] inviting spirit of the Olympic Games and ... can promote Beijing’s identity to be globally connected city.”