Philadelphia LOVE Sculpture Gets Some TLC

A famous Philadelphia landmark is off limits this week, even as the Democratic National Convention brings thousands of visitors to the city, but city officials promise it’ll be back with a fresh face next year.

Robert Indiana’s LOVE sculpture has been at the heart of the city’s JFK Plaza, also called LOVE Park, since 1976. It’s one of a number of similar pieces worldwide based on Indiana’s 1965 print of the same name, created for a Museum of Modern Art Christmas card. Philadelphia’s sculpture is one of the best-known iterations of the LOVE design. 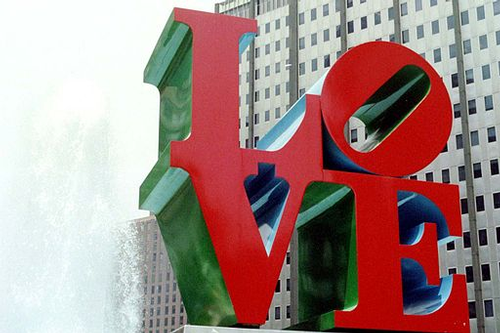 But it was recently moved across the street to Dilworth Plaza, as JFK Plaza gets a redesign—and the sculpture itself is getting ready for a restoration.

New Paint for the Sculpture

According to Margot Berg, the city's public art director, the LOVE sculpture restoration will be carried out by Philadelphia-based Materials Conservation LLC, starting in the winter with the hope of reinstalling it in JFK Plaza in late spring 2017.

The city has supplied Materials Conservation with the original specifications from when the sculpture was built, by Lippincott Co., Berg says.

The firm will work with Amaral Custom Fabrications, of Bristol, RI, to mechanically remove the layers of paint currently on the aluminum sculpture and repair any damage to the aluminum itself.

“The sculpture will be spray primed with a chromate bearing anticorrosion epoxy primer to the manufacturer’s specifications,” Berg explained in an email to Durability + Design News. “Amaral will then spray-paint the sculpture with a high-solids epoxy paint followed by a high-performance polyester polyurethane coating, both applied to the manufacturer’s specifications.”

After a few weeks of drying and curing, the sculpture will be transported back to the newly renovated LOVE Park, where it will sit atop a new stainless steel, rectangular pedestal, replacing the previous trapezoidal pedestal, which Berg notes “was not the artist’s preference.”

The sculpture's surroundings are also in for a makeover. According to plans approved last November by Philadelphia’s Art Commission, the park will undergo a big change, swapping much of its current concrete for green spaces.

The design, by Hargreaves Associates, features lawns and a fountain animating the plaza, which rests atop a parking garage and a subterranean SEPTA train line. Concrete and granite pavers will underlie much of the park.

While the new green space has its appeal, local media outlets note that one constituency isn’t so pleased with the forthcoming change: Skateboards, who have used the concrete plaza for years.

The project has a total budget of $16.5 million, from the City of Philadelphia’s capital funds.

So far, Berg says, the project is going according to plan.

“The only challenge that we face is that people will really miss the sculpture when it’s gone, and visitors to Philadelphia will be disappointed to not have the opportunity to see the LOVE and take their photo in front of it!”