Reuse Makes for a Shipshape Pavilion

A rusted ship’s hull has found new life as an art exhibit and meditation space at South Korea's National Museum of Modern and Contemporary Art (MMCA).

Named Temp’L, the temporary installation turns the prow end of a ship’s hull upside down to serve as a pavilion in the museum’s entrance courtyard. 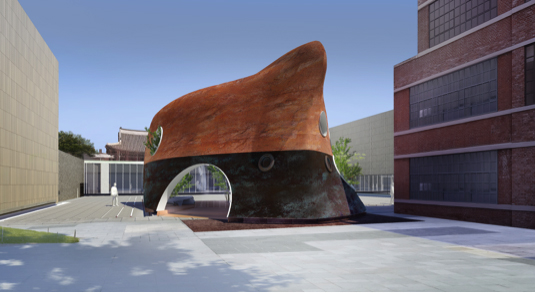 Museum of Modern and Contemporary Art, Korea
South Korean studio Shinslab Architecture turned the prow end of an old cargo ship into an art installation meant to serve as a meditation space and message about reuse and recycling.

South Korean studio Shinslab Architecture installed the structure as part of the Seoul edition of the Museum of Modern Art’s Young Architects Program, an annual series of competitions that gives emerging architects the opportunity to build projects in outdoor galleries.

According to architect Shin Hyung-chul, who leads Shinslab, the term Temp’L was derived from the words “temporary” and “temple,” reflecting the short-term nature of the installation and the relaxing space it is meant to provide during downtown Seoul’s hot summer.

Inspired by the “ready-made” art movement of the early 20th century, which transformed everyday objects into gallery-worthy art, the structure reuses the steel components of an old cargo ship.

"Temp'L is designed from the recycled steel parts from an old ship,” the team told online design magazine Dezeen. “It shows not only a beauty of structure, but it has also a recycling purpose.”

The rusted exterior of the ship, which was allowed to remain as-is, stands in stark contrast to the interior steel supports, which were painted a clean white. A spiral staircase and balcony have been incorporated into the space, while planters add greenery to the peaceful space.

This innovative artwork provides an opportunity for the viewers to reflect on global issues related to industry, environment, humanity and ecology, MMCA said.

"Any great cultural vestiges can lose their function. In the same way, a material can also lose its original value over time," the Shinslab team noted.

"The fact that the destiny of cultural relics is to be dismantled, should make us reflect upon what we need to consider for future generations."

Temp'L will be exhibited between through Oct. 3 at MMCA Seoul.