Nearly three months after a pipeline explosion leveled a house and left a man severely burned, federal investigators have found corrosion on another nearby pipeline, leading them to call for a full inspection of several lines owned by Spectra Energy.

The Pipeline and Hazardous Materials Safety Administration issued an Amended Corrective Action Order to Spectra, operator of the pipeline in Westmoreland County, PA, just east of Pittsburgh, on July 19. The order states that starting up operation again on the affected 30-inch line (Line 27) without extensive testing and correction “is or would be hazardous to life, property or the environment.”

The April 29, 2016, explosion in Salem, PA, created a 12-foot deep crater about 1,500 square feet in area, according to the PHMSA, and a burn zone with a quarter-mile radius. A nearby house was destroyed, and according to local news reports, 26-year-old James Baker, who lived near the blast site, suffered extensive burns.

Corrosion found on another pipeline near site of April blast https://t.co/0tuHkPg4tN pic.twitter.com/MXffrlaJgI

The cause of the explosion hasn’t been officially determined, but in the weeks after the blast, investigators began to zero in on corrosion on the pipeline’s welds. “The pattern of corrosion indicates disbondment of the coating material applied to the girth weld joints,” the PHMSA order notes. The joints were tape-coated at the time of the pipeline’s installation, in 1981.

“Subsequent investigation … has demonstrated that Lines 12, 19 and 28 could potentially have been damaged or adversely affected by the explosion and fire at the Failure Site,” the order says. It was issued “without prior notice and opportunity for a hearing” because the officials felt any delay could put the area around the pipelines at risk. The order cites “the discovery of additional external corrosion on other portions of the Affected Segment besides Line 27.”

One Line Returned to Service

According to the PHMSA, in the weeks after the explosion, one of the three pipelines running in the same right-of-way as the line that failed was returned to operation in the 27-mile stretch between two compressor stations where the explosion occurred. Two others have remained out of operation for that length. 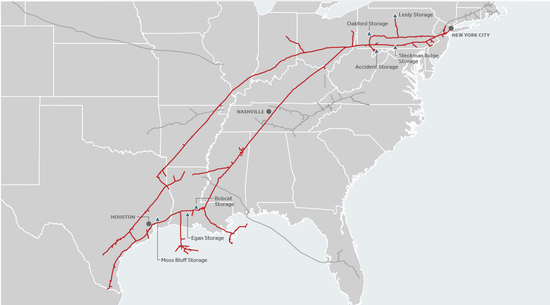 Spectra Energy
The lines being inspected are part of the Penn-Jersey segment of Spectra’s Texas Eastern Transmission system, shown here in its entirety.

One of the pipelines that is currently shut down, 24-inch Line 12, “has shown a pattern of external corrosion with characteristics similar to the condition that caused the failure on Line 27,” the PHMSA notes, based on a review of inspections and remediation records.

Beyond that immediate stretch, the pipelines, which stretch across Pennsylvania to New Jersey, have been operating at 80 percent pressure since the blast. The lines are part of the Penn-Jersey segment of Spectra’s Texas Eastern Transmission system.

The Amended Corrective Action Order calls for Spectra to examine the failed pipe for at least two girth welds beyond the affected area on each side. If damage is found, Spectra must uncover more pipe, until at least ten feet of undamaged pipe is uncovered.

On the same failed line, the PHMSA calls for Spectra to restore cathodic protection on the pipeline, perform hydrostatic testing at at least 125 percent of operating pressure, and perform in-line inspection for the entire length of the line. Other remediation could be added to the list, pending the continuing investigation.

For the other three lines, PHMSA calls for many of the same measures: Exposure of pipe for at least two girth welds in either direction from the blast site, hydrostatic testing, incremental increases in pressure. The three parallel lines must also undergo a hydrogen flame ionization leak survey at least two miles in each direction from the blast site.

Spectra has 60 days to submit a Remedial Work Plan. Spectra spokeswoman Creighton Welch told the Pittsburgh Tribune-Review that the measures were all in line with what the company anticipated for the repair and restarting process.

“The work described in the amended (order) is well-aligned with the work plan we developed as part of our thorough assessment of the entire Penn-Jersey system, including anomaly investigations, in-line inspections and hydrostatic testing,” Welch told the paper. “We have begun or completed many of the action items in the amended (order).”

The PHMSA and Spectra are working on a Root Cause Failure Analysis, which, Welch told the Tribune-Review, should be complete by fall.