What once was planned as a 72-story high-rise that would pierce the skyline west of Central London is looking more like an 18-story “floating cube” according to new, revised plans from architect Renzo Piano.

The building, adjacent to Paddington Station in London’s City of Westminster, was first announced in October 2015 as a residential and commercial mixed-use skyscraper measuring 833 feet. But local opposition quickly grew, citing concerns about the effect the so-called “Paddington Pole” would have on the skyline. 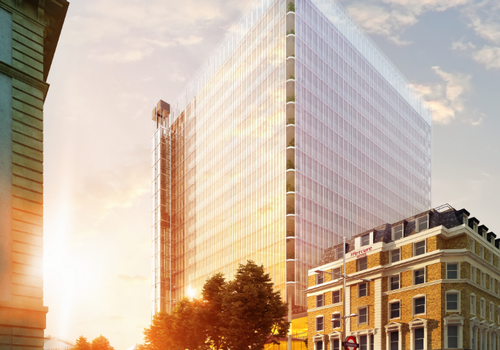 Images: Sellar Property Group
The 14-floor office cube portion of the building will rest on a lower level that is considerably narrower than the upper floors, providing the illusion that the main cube is suspended in mid-air.

In February, the Renzo Piano Building Workshop withdrew the original tower plan, bowing to pressure from groups concerned with preserving the character of the skyline. The building plans had reportedly been scheduled to go before Westminster City Council in March.

Piano and developer Irvine Sellar, the team behind the Paddington plans, were also responsible for London’s famous Shard building, the 95-story pyramidal skyscraper on the south bank of the Thames that is the tallest building in the U.K. Some had taken to calling Paddington Pole the “Skinny Shard” in reference to its height and slim cylindrical shape.

The new design is called the “Paddington Cube,” and, according to Sellar Property Group, will work in tandem with the famous nearby transit station.

“RPBW has perfectly balanced the desires of the community, the constraints of the site and the need for commercial viability to produce a scheme that will transform Paddington Station’s front door and the immediate area around it,” Sellar said. “At the same time Paddington Place will be a catalyst to create a thriving neighbourhood—for retail, leisure and business.”

While the original Pole design included residential units, the new Cube layout is office and retail space; Sellar says the building will include 80,000 square feet of retail and restaurant space, including a rooftop restaurant.

The 14-floor office cube portion of the building will rest on a lower level that is considerably narrower than the upper floors, providing the illusion that the main cube is suspended in mid-air.

“When you exit the station you will see a clear floating cube ‘levitating’ above the ground,” said Piano and Joost Moolhuijzen of RPBW. “We are obsessed with lightness and have given the building a sense of flying above the ground and defying the laws of gravity.”

The original skyscraper proposal had a target completion date of 2020; however, there has been no indication of when the new Cube could be complete.

While the new proposal is less of a shock than the skyscraper design was, some critics are still unconvinced.

Barbara Weiss, founder of the Skyline Campaign, which opposed the Pole proposal, told Dezeen Magazine that while she is pleased with the reduction in height, "It's a very big bulky building. It doesn't float—they try to make you think it floats, it's actually still massive and in our opinion much too big for the site."