To kick off its third biennial International Roof Coatings Conference this week in Philadelphia, the Roof Coatings Manufacturers Association (RCMA) will participate in a large volunteer cool roof coating project in the city.

On Monday (July 18), the first day of the four-day conference, members of RCMA will supply and apply reflective cool roof coatings to the rooftops of 18 row homes on the 1200 block of West Seltzer Street in North Philadelphia to support the Energy Coordinating Agency (ECA)’s EnergyFit Philly program.

The EnergyFit Philly program aims to preserve affordable housing by repairing, and providing energy retrofits to, low-income homes in extremely poor condition, RCMA said in an announcement on the upcoming project. 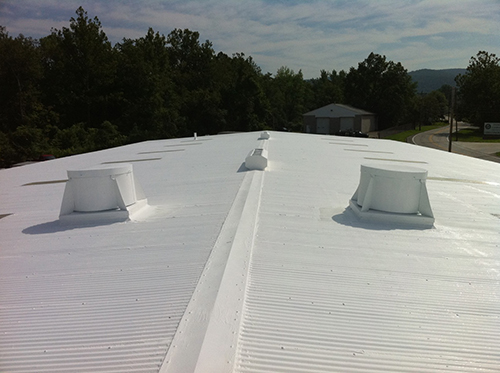 RCMA
According to RCMA, roof coatings reflect visible light as well as infrared and ultraviolet radiation, causing roof surface temperature to drop by up to 55 degrees Fahrenheit.

“It is an innovative approach to the prevention of homelessness by preserving and stabilizing affordable housing that is currently ineligible for energy conservation programs due to roof leaks and other home repair needs,” RCMA adds.

The application of roof coatings marks a final step in the energy efficient process for these residences, the organization notes.

In addition to announcing the project, RCMA also described the benefits of roof coatings, noting that they are designed for protecting and extending the useful service life of roof assemblies for new construction and, more commonly, existing roof coverings.

Reflective roof coatings extend the life of the roof by reducing heat transfer into the building, decreasing thermal shock (thermal expansion and contraction of the roof membrane), and helping to mitigate leaks, the organization says.

According to RCMA, roof coatings reflect visible light as well as infrared and ultraviolet radiation, causing roof surface temperature to drop by up to 55 degrees Fahrenheit. Lower roof temperatures in turn help to reduce cooling costs for buildings with air conditioning units and reduce interior temperatures and relative humidity in buildings with or without cooling units.

In terms of energy savings, a building owner can slash energy usage (kWh) by up to 15 percent after installing reflective roof coatings, according to information from the U.S. Environmental Agency’s Energy Star program, RCMA relates.

This year's International Roof Coatings Conference will feature a variety of speakers discussing the latest in roof coatings technologies and applications.