Aircraft manufacturer Boeing Co. is putting non-stick coatings to the test in an operational testing later this summer.

In partnership with Brazil’s Embraer SA, the Chicago-based corporation plans to assess whether these coatings can also play a vital role as an anti-icing coating, media company Bloomberg reported. 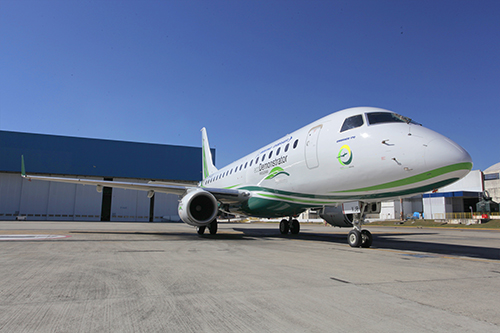 Boeing
Boeing and Embraer unveiled the next phase of the Boeing ecoDemonstrator program today—an Embraer 170. The flying testbed will feature technologies meant to improve airplane environmental performance, including a non-stick coating to deflect ice and bugs,

The de-bugging, ice-phobic coating is one of several technologies that will be proofed in the companies’ ecoDemonstrator program, designed to improve airplane environmental performance and accelerate the introduction of technologies into the marketplace.

Boeing and Embraer announced their latest technology testing strategy with the reveal of their newest ecoDemonstrator aircraft Thursday (July 7).

An Embraer E170 will serve as a new flying test bed featuring advanced environmental technologies that will undergo operational testing in Brazil in August and September.

"As industry leaders, we have a unique opportunity to invest in technologies that encourage our industry's long-term, sustainable development, while supporting our customers' environmental goals," said Boeing Chief Technology Officer John Tracy.

This round of ecoDemonstrator tests focus on the companies’ goals of improving fuel efficiency and environmental performance of aircraft and meeting a new carbon emissions standard announced.

Benefits of a Non-Stick Coating

Among the suite of technologies to be tested, the new aircraft will feature an ice- repellent paint designed to reduce icing and help prevent accumulation of dirt and bugs due to its low adhesive property, Boeing said.

Primarily, the special paint is intended to cause ice to slide easily off a plane’s wings and other surfaces, which can pose a danger to aircraft in flight. As a result, it may also offer energy savings by reducing the use of bleed (hot air diverted from the engines) or electrical systems that are currently used to prevent icing on aircraft wings, as well as the need for chemical deicers.

Supplied by PPG, the coating was developed through research by Boeing and the National Aeronautics and Space Administration, Bloomberg noted.

Together, they worked on coatings that would shed insects from the leading edge of a 757 wing, keeping it smooth so a buildup of bug remains would not increase drag and fuel consumption.

Another benefit, Boeing noted, is that the special paint can also help operators save water by reducing the need for frequent aircraft washing.

The paint on the ecoDemonstrator is proprietary and not commercially available, according to Boeing spokesman Peter Pedraza.

The ecoDemonstrator collaboration expands a relationship that began in 2012 when Boeing and Embraer signed a cooperation agreement to benefit their customers, their companies and the global aviation industry.

Since then, Boeing and Embraer have supported Embraer's KC-390 defense aircraft program and improved runway safety by providing commercial customers with tools to reduce runway excursions.

The ecoDemonstrator flights scheduled to begin next month will also test a LIDAR (Light Detection and Ranging) technology intended to increase air data reliability; a new wing design with improved slats to reduce noise on takeoff and approach; special sensors and air visualization techniques near the wing surface to better understand in-flight aerodynamics; and a Brazilian-produced biofuel blend made up of 10 percent bio-kerosene and 90 percent fossil kerosene.