American paint and coatings manufacturers are urging one of the nation’s largest healthcare systems to modify a ban on the use of antimicrobial products, including paints, in its facilities.

In a letter sent to Kaiser Permanente in June, the American Coatings Association said it was concerned with the broad nature of Kaiser’s “Prohibition of Antimicrobial Chemicals in Fabrics, Furniture and Finishes Bulletin,” (Bulletin Number: 2015-05).

The healthcare system announced its position on antimicrobial substances in December 2015, targeting 15 specific chemicals commonly found in paints, flooring and other building products. 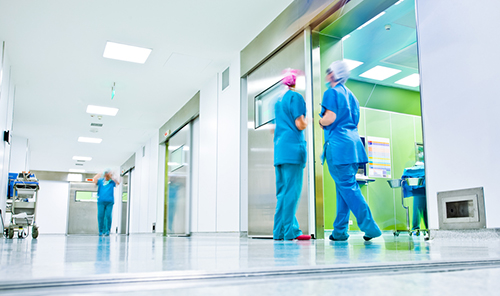 © iStock.com / VILevi
The American Coatings Association is concerned about the broad language in healthcare provider Kaiser Permanente's bulletin calling for a ban on antimicrobial additives in finishes.

“Health care interiors can be beautiful spaces designed to inspire health and healing,” said John Kouletsis, Kaiser Permanente’s vice president of facilities planning and design, in a statement the company issued at the time.

“But lurking beneath the surface can be a surprising number of pollutants that are anything but benevolent.”

In arriving at the decision to ban, Kaiser Permanente—which it says operates 38 hospitals and more than 600 medical offices throughout the U.S.—cited experts and a Centers for Disease Control and Prevention report, published in 2003, that said “no evidence is available to suggest that use of products treated with antimicrobial chemicals will make patients healthier or prevent disease.”

In 2006, the hospital system began asking its architects and designers to stop using antimicrobial products. But it wasn’t until recently that the company had a formal policy against using them.

In its letter to Kaiser Permanente’s National Facilities Services, ACA expressed concern with a chemical management approach based on a single attribute and noted that, as written, the policy could actually bar Kaiser from specifying low-VOC (volatile organic compounds), water-based coatings.

ACA offered industry insight into the various usages of antimicrobials in paints and coatings.

Further, ACA added that the U.S. Environmental Protection Agency exempts in-can preservatives and antimicrobial claims made for the paint film from FIFRA under the “treated articles exemption.” Each of the preservatives listed in Kaiser’s policy have been reviewed and determined as safe under FIFRA, ACA said.

Moreover, the association noted that some manufacturers have formulated paints and coatings that claim “full biocidal benefits” and these products are registered as biocidal products under FIFRA, having undergone extensive testing, risk assessment and labeling requirements.

The association says that the bulletin language is unclear on whether Kaiser is focused solely on “products and finishes” that claim to offer a biocidal benefit or if the use of antimicrobials as in-can or dry film preservatives could also be affected by the ban.

“However, after speaking with a Kaiser representative, ACA understands that banning the use of in-can preservatives was not the intention of the policy,” the manufacturers group reported. “ACA is requesting that Kaiser update the Bulletin to better define the narrower scope of the policy.”

Additional concerns with the bulletin were also raised, including ACA’s disagreement with the notion that “products and finishes that do not contain these additives or treatments are increasingly available.”

“Emulsion polymer binder systems are responsible for the drastic reduction in the use of organic solvents which are typically the source of VOCs from the paint and coatings industry,” ACA explained. “Over the past three decades, industry has switched from traditional polymer systems that used organic solvents to emulsion polymer systems where the primary solvent in the formulation is water.

In addition to narrowing the ban’s scope and ACA urged Kaiser to exempt both treated articles and FIFRA-registered products manufactured by the paint and coatings industry.