High-performance coatings manufacturer Tnemec is inviting nominations for its 11th annual Tank of the Year competition, which honors innovative use of the company’s coatings on water storage tanks.

All tank styles, both new construction and renovation projects, across the U.S. and Canada are eligible, and the deadline for nominating projects is Oct. 3. 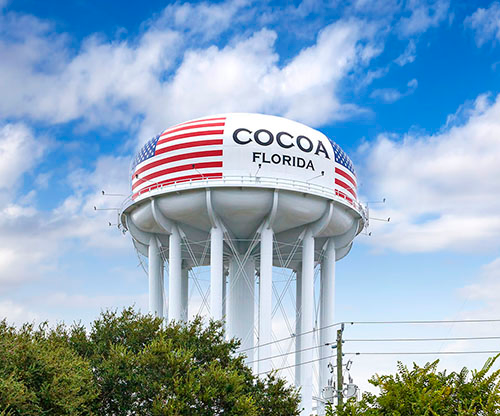 Tnemec
The flag-adorned water tank in City of Cocoa, FL, beat out more than 200 competitors to be named the 2015 Tank of the Year.

“It’s amazing how the contest has grown during the past decade. It has become a great way to showcase what’s going on in the water tank industry. Fabricators, contractors and owners can take pride in being associated with projects that are nominated for Tank of the Year.”

A photo or photos of the tank must accompany all electronic nominations.

Once the nomination deadline has passed, photos of all nominated water tanks will be posted on the contest website, available Oct. 4-14, where the general public can vote for the People’s Choice.

The People’s Choice will automatically be considered among 11 other committee-determined finalists for the official Tank of the Year honor.

A committee of water tank enthusiasts will judge these finalists based on artistic value, significance of the tank to the surrounding community and challenges encountered during the project.

The overall winner of the 2016 Tank of the Year contest will be announced Friday, Oct. 21.

Standing 156 feet above the town’s beaches, the winning tank design is wrapped with three American flags and the town’s logo, all painted using the company’s high-performance coating systems. This legged-tank incorporated Tnemec systems on its interior and exterior for decades, utilizing the latest technology each time a recoat was needed, the manufacturer explained.