In a settlement with the U.S. government, the U.S. Navy and a Guam-based former Navy contractor will pay fines and take corrective action to address alleged hazardous waste violations at a facility on the island’s Apra Harbor. 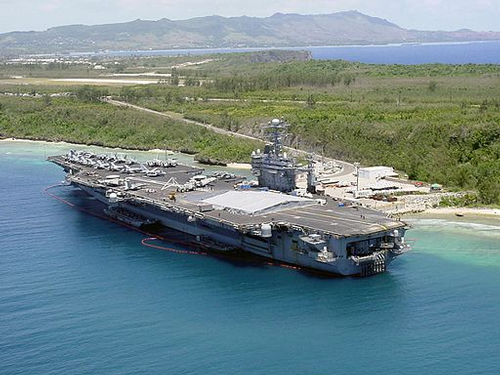 U.S. Navy photo, via Wikimedia Commons
Guam Shipyard ran a shipbuilding, repair and paint facility that contracted with the U.S. Navy at a facility on leased federal property on Guam's Apra Harbor.

As part of the agreement, Guam Shipyard, which ran a shipbuilding, repair and paint facility that contracted with the U.S. Navy at a facility on leased federal property, will arrange the disposal of an abandoned ship that’s been stuck on the shore for more than a decade.

The shipyard, once a U.S. Navy facility, is located on the U.S. Naval Base Guam, on Guam's western coast.

Fines for Both Navy and Contractor

The Environmental Protection Agency announced Tuesday (June 21) that Guam Shipyard and the U.S. Navy will pay fines of $44,893 and $80,680, respectively, after the agency found improperly stored hazardous waste at the shipyard facility, on Guam's Apra Harbor.

Compliance inspections that took place at the shipyard in 2012 and 2013 found violations, according to the EPA’s website. Guam Shipyard ran the facility at that time; the company lost its contract in October 2013 and laid off hundreds.

In addition to the abandoned ship, the EPA alleges that improperly stored waste, including lead paint and zinc powder, was found during inspections.

According to a Guam Shipyard brochure from 2011, the company ran a paint shop on the site that performed abrasive blasting, water jetting and other surface preparation, and applied primers, top coats and other surface coatings for protective purposes.

Earlier this year, a drydock that had been owned by Guam Shipyard set sail for the Philippines.

The Navy issued a statement to KUAM regarding the agreement: "The Navy has voluntarily entered into an agreement with the U.S. EPA concerning site conditions at the former shipyard facility on Naval Base Guam. The conditions arose during Guam Shipyard's control of the facility under various real estate instruments. As the landowner, the Navy took prompt action to address all environmental concerns and agreed to a settlement with U.S. EPA. The Navy remains committed to being a benchmark environmental steward and continually seeks to improve the environmental compliance of contractors conducting operations on Navy property."