Bipartisan legislation that intends to bring the Toxic Substances Control Act into the 21st century has been signed into law.

U.S. President Barack Obama signed The Frank R. Lautenberg Chemical Safety for the 21st Century Act on Wednesday (June 22), revising the TSCA for the first time since 1976. The landmark law was named after the late senator who introduced a version of the bill in 2013. 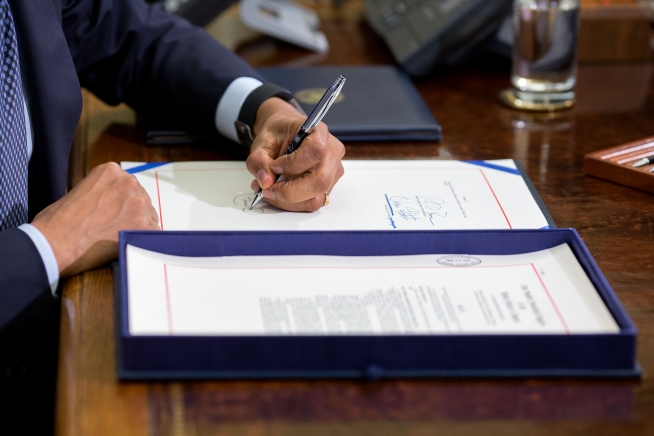 The measure passed in both the House of Representatives (May 24) and Senate (June 7).

A copy of the law can be viewed here.

For decades, environmental and health advocates have complained that the country’s primary chemical management law was broken and weak, allowing as many as 85,000 untested chemicals to enter the marketplace.

Under the new law, the enforcement responsibility of the Environmental Protection Agency is expanded. The EPA is required to test the tens of thousands of unregulated chemicals that are currently on the market, and the roughly 2,000 new chemicals introduced each year.

“Folks should have the confidence to know the laundry detergent we buy isn’t going to make us sick, the mattress our babies sleep on isn’t going to harm them,” Obama reportedly said at a signing ceremony for the legislation.

The process of evaluating chemicals will take time, reports say. The federal agency will review a minimum of 20 chemicals at a time, and each has a seven-year deadline. After a new rule is promulgated, industry may have years to phase out the chemicals, reports add.

Other updates include making it more difficult for manufacturers to keep chemical information confidential based on trade secret claims.

The new law also allows EPA determinations to preempt state regulations. States will still be able to regulate chemicals before the agency reviews them, but they ultimately must uphold the EPA’s final action on a chemical.

This provision was key to getting industry on board, reports relate.

Along with 138 other associations, the ACA pushed lawmakers to move quickly to pass the legislation, stating that the measure “creates a transparent, evidence-based, cohesive national program that will improve the regulation of chemicals used in commerce, provide more certainty and confidence in the regulatory framework, and have a significant impact on each of our industries, the products we make/or the services we provide, and the millions of workers we represent.”

A Burden to Implement?

Critics say the new law will be an enormous challenge for the EPA.

“The bill doesn’t provide EPA enough money to get through this enormous backlog of old, and in some cases, very dangerous chemicals to assess whether they need to be regulated or even banned,” Scott Faber, vice president of government affairs at the Environmental Working Group, told PBS Newshour.

“It will take EPA decades to get though the thousand most dangerous chemicals that EPA itself has said need urgent review.”

Further, some fear that strong state protections against certain chemicals could be preempted by weaker federal protections.

“It has very strong principles, but the implementation could leave less than the desired outcome,” Leonardo Trasande, a New York University professor and environmental health scholar told Time.com.