A suburban Chicago business owner is facing up to 80 years in prison after a federal jury found her guilty of fraud for her role in a scam involving transit and road construction projects in the city.

Elizabeth Perino, 62, owner of Perdel Contracting in Lockport, IL, was convicted of three counts of wire fraud and one of mail fraud for taking advantage of a set-aside program for woman-owned businesses, the U.S Attorney’s Office in the Northern District of Illinois reported.

While Perino's business is qualified to participate in city projects as a certified Disadvantaged Business Enterprise (DBE) and Women-Owned Enterprise (WBE), she illegally allowed it to be used as a pass-through so main contractor McHugh Construction and subcontractor Anthony Capello could satisfy the female hiring requirements for their Chicago construction projects.

A city of Chicago ordinance sets a goal of awarding at least 5 percent of total annual funding of all city contracts to WBEs, the attorney’s office explained. For contracts exceeding $10,000, each contractor has to commit a certain percentage of labor to WBEs, either as a joint venture or subcontractor, or by purchasing goods or services from a WBE.

Capello, who is also facing charges related to the DBE scam, acted as a witness to testify against Perino during the trial, the Chicago Sun-Times reported.

The charges against Perino date back three and half years to February 2012, when the FBI announced its cases against her and Capello.

Perino filed paperwork indicating Perdel was a subcontractor on the projects, giving McHugh Construction the necessary percentage of woman-owned businesses working on the job, the Sun-Times said.

Although Perdel would perform no actual work on the projects, the company was expected to receive payment equivalent to a percentage of the work that Perdel fraudulently claimed to have performed, according to the attorney’s office.

McHugh Construction settled its case, in which a whistleblower revealed its role in the DBE scheme, for $12 million in 2014 under the condition that it would not be barred from future government contracts.

Additionally, Perino reportedly conspired with Capello in 2011 to act as a pass-through DBE, making it look as if Perdel would provide labor and equipment on a multimillion-dollar runway repair project at O'Hare International Airport. 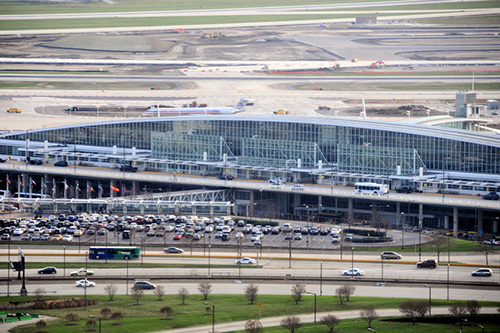 © iStock.com / mtcurado
Perino reportedly participated in a pass-through scheme that made it look as though her company would provide labor and equipment on a multimillion-dollar runway repair project at O'Hare International Airport.

As reported earlier, here, too, Perino falsified various documents to disguise the fact that the company did not meet the DBE requirements and did not perform any labor or provide any equipment for the project.

Capello, who was charged with one count of mail fraud in 2012 for allegedly operating as a falsely certified WBE and DBE, testified as a witness for two days of the four-day trial, sources said.

During that time, evidence showed that Perino agreed to act as a pass-through WBE/DBE on two city projects, meaning that Perdel’s employees would perform no work and Perdel’s equipment would not be used.

For the O’Hare project, recorded conversations reportedly revealed how Perino and Capello, the general contractor, plotted to place his employees on Perdel’s payroll to perform the work that would be credited to Perdel.

Despite providing neither employees nor equipment, this deal would have paid Perino $365,000 despite, according to the Sun-Times.

At the trial’s conclusion, Perino was convicted on three counts of wire fraud and one count of mail fraud. The conviction is punishable by a maximum sentence of 80 years in prison.