The Zhejiang Gate Towers, under initial construction now, will eventually not only be the tallest skyscrapers in Hangzhou, China; they’ll be a couple of very tall examples of sustainable design. 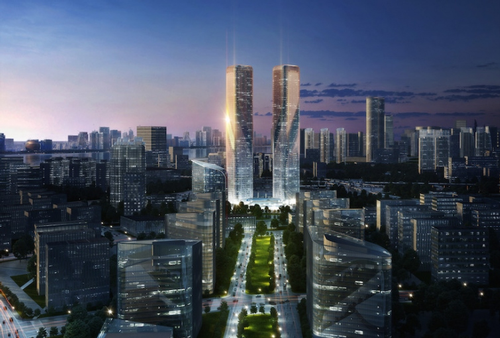 Images: LAVA
The pair of skyscrapers will be 918 feet tall, and the architects refer to the facade as “two groups of long, vertical fins wrapped around the buildings."

The pair of skyscrapers, designed by Australian-German firm LAVA (Laboratory for Visionary Architecture), will be 280 meters tall (918 feet), and the architects refer to the spiraling facade as “two groups of long, vertical fins wrapped around the buildings."

LAVA is aspiring to LEED Gold certification for the buildings, which are scheduled to be finished in 2019. The aluminum fin facade is meant both to help shade the interior and to create a shimmering effect when viewed from afar.

The architects have specified multi-colored, high-performance glazing for the towers, which will also help to limit heating in the building from the sun, and will add to the “refracted light effects animating the facade,” according to LAVA.

According to Designboom, the towers will use eight “supercolumns” for structural support, reducing the materials used in the structural system by 30 percent.

With LEED certified construction becoming more common, it’s not unheard of for a skyscraper—new construction or retrofit—to attain gold or platinum status.

The twin-skyscraper design was inspired, LAVA says, by Chinese characters for “gate,” and the buildings will serve as a symbolic entrance into Hangzhou, which is the capital of Zhejiang province, in eastern China.

The two main towers will be joined by a third, smaller tower, about 90 meters (295 feet) tall. The complex will host office, retail and residential space, according to the architects.

The property is owned by Shimao Property Group, a major developer in Beijing and throughout China.

LAVA, founded in 2007, has been responsible for designs including Stuttgart’s Mercedes-Benz Museum and Beijing’s Watercube, used in the 2008 Olympics.