The federal agency responsible for pipeline safety has issued a third corrective action order (CAO) to the pipeline operator responsible for a May 2015 breach that spilled 140,000 gallons of crude oil on the California coast.

The order, issued Thursday (June 16) by the U.S. Department of Transportation’s Pipeline and Hazardous Materials Safety Administration (PHMSA), notified Plains All American Pipeline LP that additional corrective actions—from leak detection to corrosion control measures—must be taken with Lines 901 and 903 before the pipeline system can be restarted. 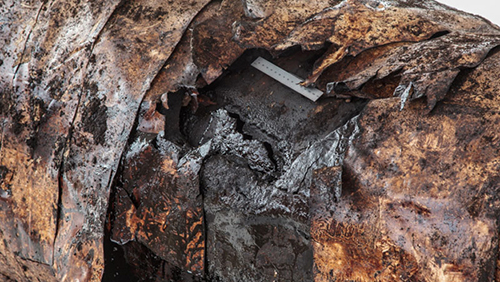 Br
In response to the May 19, 2015, pipeline breach caused by external corrosion (shown), PHMSA has issued a third amendment to its Corrective Action Order requiring Plains to fulfill specific actions before the failed pipeline (Line 901) and an adjoining pipeline (Line 903) can be restarted.

Failure to take these corrective actions to Lines 901 and 903, “would be hazardous to life, property, or the environment," wrote Alan Mayberry, Acting Associate Administrator for Pipeline Safety.

Houston-based Plains owns the 10.6-mile pipeline that runs alongside U.S. 101 in California that suffered a rupture in a 2-foot-wide pipe, sending crude oil into Refugio State Beach and a plume of oil nine miles into the Pacific Ocean.

The section of pipe reportedly burst after pumps on the pipeline were shut down and restarted, sending a larger volume of oil through the pipe at higher pressure—a jump to 721 pounds per square inch from the earlier 677 psi. Despite a low-pressure alarm indicating the pressure drop after the break, the pipeline wasn’t shut down until more than 30 minutes later, contributing to the volume of oil released in the spill.

Line 903 was later idled due to concerns that it was showing similar corrosion characteristics as Line 901.

In that report, PHMSA identified external corrosion as the direct cause of the rupture, with the following factors contributing to the failure:

The order also references an earlier Root Cause Analysis report from Det Norske Veritas (DNV), which identified the failure as stemming from:

With those determinations in mind, the order now also requires Plains to take a variety of actions prior to restarting Line 901.

Among the requirements spelled out in the 11-page document, the operator must implement advanced leak detection capabilities, make modifications to the existing alarm system, install additional safety valves and pressure sensors, and train staff regarding emergency response and shutdown procedures.

In terms of corrosion prevention requirements, PHMSA mandates Plains deliver a long-term plan regarding corrosion under insulation (CUI) on Line 901. In order to correct what was considered inadequate handling of the issue, Plains must:

If Plains chooses to request the special permit, it is required to perform more frequent reassessments; appropriately assess for all threats, including stress corrosion cracking; and apply more stringent repair criteria targeted at CUI, PHMSA specifies.

For Line 903, which has similar construction and operating conditions as Line 901, prior to restart, Plains must submit a remedial work plan that investigates and remediates anomalies found in the line, including those that show similar characteristics to the failure site.

The order also requires a written Restart Plan 60 days in advance of resuming service of Line 903, as well as operating pressure restrictions.

Plains must keep the agency informed of all field activity related to the requirements and proposed startup dates.

The terms and conditions of the report are effective immediately.

According to a statement issued following the release of the PHMSA final report, Plains is not commenting on the matter because of pending investigations and litigation related to the incident.

The company was indicted on 46 criminal counts by a Santa Barbara County grand jury. The indictment, returned May 16, accuses Plains of four felonies, including knowingly discharging a pollutant into state waters. The other 42 charges are said to be misdemeanors related to wildlife losses.

The company faces penalties up to $2.8 million if convicted of all charges, according to prosecutors.