A European research institute has put its efforts behind developing an application-specific coating process for anti-reflective coatings that could benefit a range of glass surfaces.

The Dresden, Germany-based organization was scheduled to present its latest results at the International Conference on Coatings on Glass and Plastics (ICCG) 2016, June 12-16, in Braunschweig, Germany.

From windshields and solar cell to windows and eyewear, a variety of manufactured products require anti-reflective coatings that allow the glass surfaces to remain crystal clear. 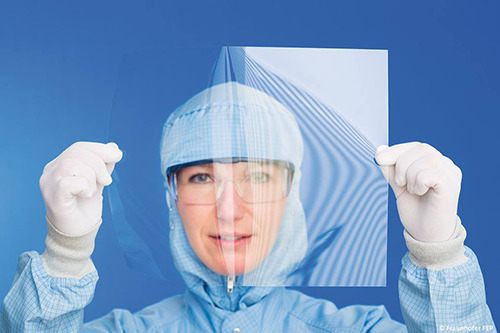 Solar cells, in particular, benefit from these coatings because they enable the cells to capture nearly all the sunlight that falls on them when the surface inhibits its reflection.

Application of these coatings to substrates like plastic films and rigid or flexible glass, however, can pose a challenge, Fraunhofer FEP says. The coating process needs to be economical while also matching the properties of the layers to the purpose of the specific application, it adds.

Fraunhofer FEP puts its scientific know-how and industrial facilities to work by partnering with clients to develop specialized anti-reflective coatings that meet their specific applications.

In particular, Fraunhofer FEP researchers are now sharing the new method they have developed to create anti-reflective coatings on glass.

“Thanks to the resultant continuous transition in optical properties from air to glass, anti-reflective behavior is exhibited by the surface of the glass,” Solar Novus writes.

The effect is said to be similar to a process FEP uses for making plastic sheets or web anti-reflective. Developed jointly with the Fraunhofer Institute for Applied Optics and Precision Engineering IOF and industrial partners, that process nanoetches the surface of polymers directly with plasma.

“The gradual transition in refractive index from air to polymer achieved this way is likewise anti-reflective,” the technology site explains.

In a conventional anti-reflective coating, layers of high and low refractive index are deposited alternately, the scientists note, which confines the anti-reflective effect to a restricted wavelength. The wavelength’s range can only be broadened through a complex system of interfering layers.

However, an anti-reflective coating system that utilizes the effects caused by rough surfaces is not restricted by wavelength, the researchers explain. Reflection is inhibited over a wide spectral range in a single layer of coating or a single plasma etching step, according to the team.

“The layers achieved with the new process are characterized by a good mechanical durability and the reduction of reflections over a wide spectral range,” explains Thomas Preußner, Fraunhofer FEP researcher for large-area in-line processing told ChemEurope.