The federal government is moving ahead with action to clean up the site of a former Sherwin-Williams paint factory in New Jersey that it says contaminated its surroundings with toxins and carcinogens, including lead and arsenic.

The new action relates to the Route 561 Dump Site, part of a collection of three sites the Environmental Protection Agency calls the “Sherwin-Williams Sites.” The other two adjacent sites are the Sherwin-Williams/Hilliard’s Creek Superfund Site and the United States Avenue Burn Superfund Site. The sites are located in Gibbsboro and Voorhees, NJ.

A Century of Paint Manufacturing

The sites in question were home to a factory that produced paints and varnishes starting in the mid-19th century. The plant, originally run by John Lucas & Co., was bought by The Sherwin-Williams Company in the 1930s and continued to operate until 1977. Sherwin-Williams sold the property in 1981 and no longer operates a manufacturing facility in the vicinity. 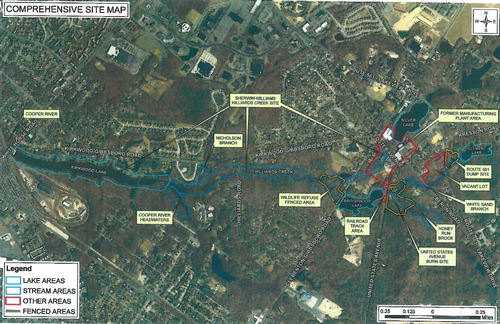 After the plant closed, the New Jersey Department of Environmental Protection worked with Sherwin-Williams on disposing of waste on the site; in the 1990s, the EPA took over work on the site, and expanded its reach based on new findings of contamination at the Route 561 Site and the Burn Site.

The EPA’s cleanup efforts were initially announced last year. The Route 561 Dump Site is considered “Operable Unit 2” of the three. “Operable Unit 1,” which involves residential properties on the sites, was addressed in a September 2015, agreement, and the EPA says that soil cleanup project will begin this summer. The EPA says about 18 residential properties require remediation, though that number is subject to change.

The third phase of the cleanup, which addresses groundwater, will commence after the Route 561 phase has begun.

According to the EPA, “Under previous orders by the New Jersey Department of Environmental Protection and the EPA, Sherwin-Williams has removed 8,096 cubic yards of sludge from a former lagoon area, removed 44,785 gallons of liquid waste, installed a soil vapor extraction treatment system to reduce the volatile organic compounds in the soil near two former plant buildings, installed fencing to limit access to some source areas and taken other steps to address the pollution.”

The EPA’s preferred course of action for the site involves what it calls excavation, capping and institutional controls.

The agency has put forward that it would like soil in the contaminated areas to be removed and disposed of off-site, from two to four feet in some areas to up to 14 feet deep in the most contaminated spots. Areas would then be capped—with fresh soil or, in parking lot areas, with asphalt.

Sediment in the contaminated streams would be removed and disposed of off-site as well. Surface water would then be monitored for contaminants to determine if further action needs to be taken.

The EPA also says it's likely the ground under Route 561 itself is contaminated in the vicinity of the site.

“Lead is a toxic metal that can hurt a child’s ability to learn and cause a range of other very serious health problems,” said EPA Regional Administrator Judith Enck. “Our proposed plan is an important step forward in our comprehensive strategy to cleanup this complex site and protect people’s health.”

“The Sherwin-Williams Company is committed to actively working with USEPA, NJDEP, and other stakeholders, to move the site remediation process forward. We are prepared to immediately commence engineering design activities and invest significant resources to implement the remedy at the Route 561 Dump Site and related properties. Sherwin-Williams is committed to implementing a site remediation program that is protective of human health and the environment, in compliance with legal and regulatory requirements, and responsive to stakeholder input.”

Community input is encouraged in the cleanup planning process. Public comment runs from June 13 through July 12, 2016; comments can be addressed to Renee Gelblat: gelblat.renee@epa.gov.

A public meeting will be held Tuesday, June 21, at the Gibbsboro Senior Center, in Gibbsboro, NJ, at 7:00 p.m.

The entire plan for the Route 561 site can be read here.