Working to eliminate the risk of corrosion on train tracks worldwide, a U.K. steel manufacturer has launched what it calls a “revolutionary” rust-resistant rail line.

Designed to withstand the most corrosive of environments, British Steel’s new Zinoco—which stands for “Zinc for no corrosion”—is reported to surpass the protection offered by current rail coating technologies. 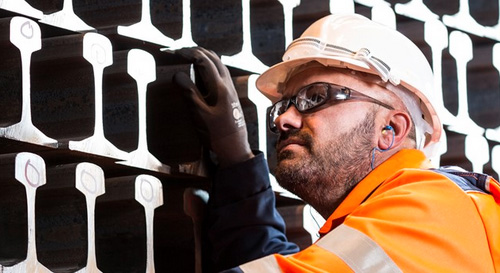 British Steel
British Steel has announced its new rust-resistant rail product, meant to be installed in harsh environments where corrosion is expected to be the main cause of future rail replacement.

“We have become increasingly aware that many customers have to replace rail prematurely due to rapid corrosion in isolated segments of their network,” noted Richard Bell, British Steel’s Rail Sector Head.

“We have developed Zinoco to dramatically delay the onset of corrosion of rail in the broadest range of railway conditions.”

Described as a premium coated rail, Zinoco is specifically targeted for harsh environments where corrosion is expected to be the main cause of future rail replacement: coastal lines, wet tunnels, level crossings, mineral lines and salt pans.

Network Rail, the agency responsible for the U.K.’s railway lines, requested a coating that would withstand the demands of real-life installation and use, he said.

Specifically, the rail authority sought a product that would offer impact resistance against minor mechanical damage and also offer sacrificial protection to extend service life. It also emphasized the need for protection against stray current corrosion.

Sacrificial protection is an electro-chemical reaction that occurs when the anode sacrifices itself in favor of the cathode. The resulting flow of electrons prevents a corrosive chemical reaction.

On the Zinoco coated rail, the company explained, the zinc rich (anode) coating corrodes in preference to the steel (cathode), therefore preventing the steel from corroding.

The zinc oxide creates a strong barrier to further corrosion; according to British Steel, this guarantees protection, even when the zinc layer is slightly damaged.

Extensive testing at its Scunthorpe headquarters showed that the new rail line can be expected to outlast traditional uncoated rail by around five times in a variety of aggressive environments, according to the company.

The new Zinoco plant built at British Steel’s Scunthorpe Rail and Section Mill is an automated facility, which is said to enable rails to be coated more efficiently than the previous coated rail product.

It has reportedly already secured contracts in the U.K., Ireland and France.