When It Rains, It Shows

Boston’s sidewalks look just like any other city’s sidewalks…until it rains. A rainy day quickly exposes lines of poetry to the city’s pedestrians.

Raining Poetry is an art project installed throughout the city by the nonprofit group Mass Poetry, in collaboration with the City of Boston. 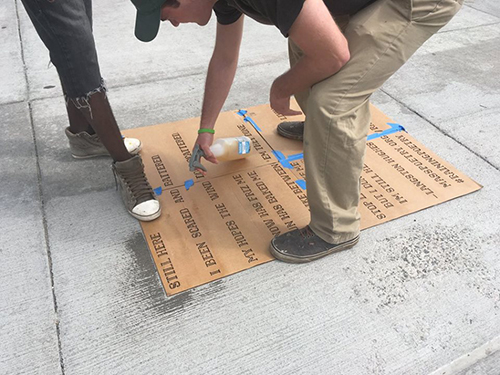 Photos courtesy of Mass Poetry
The Raining Poetry project in Boston uses a hydrophobic coating to make poems appear on city sidewalks on a rainy day.

To bring the verse to light, the city’s Mural Crew uses stencils and a water-repellant coating to lay down the lines, which remain invisible to passersby until the rain falls.

The first poems, selected by Boston’s poet laureate Danielle Georges for their relationship to the city or references to rain and water, were installed April 1 in recognition of National Poetry Month. Additional verse was put down in select locations May 13, and the group plans to expand its installations throughout the town.

Boston’s Mural Crew, a youth organization that involves young artists in the creation of public art, sprays biodegradable water-repellent coating over cardboard stencils created by area artists. The coating disappears after it dries and is not visible again until the area around the coating becomes wet. When wet, the surrounding surface darkens, revealing the poem which has repelled the water.

Sara Siegel, Mass Poetry’s program director, told PaintSquare News the product they use is the purpose-built Invisible Spray from Rainworks.

The company’s superhydrophobic, oleophobic coating, specifically designed for the purpose of making the invisible-when-dry “rainworks,” is nontoxic after it dries, according to its website. It notes that it does contain a solvent and so should not be poured down a drain. After use, the solvent evaporates, making it environmentally safe.

An application will generally last two to four months before completely wearing away, depending on foot traffic. The company notes that it can also be easily scrubbed away using “any earth-friendly cleaning product” if removal is required, and it will not damage the surface it is applied to.

Georges said her role in the project reflects her role as poet laureate, through which she strives to raise the status of poetry in the city’s residents. “My mission is to make poetry available and accessible through programs, civic events, public readings, and collaborations,” she said.

The public art project, which scatters the poems throughout public spaces in Boston, is meant for everyone, she said. “I think this is a wonderful way to bring poetry to the people.”

“Our hope is in the next two years everyone in the state will encounter a poem in their daily lives at least once or twice a month,” Siegel told the Boston Globe. “This a fun and unusual way to do that.”

The first four poems applied were:

Founded in 2009, Mass Poetry supports poets and poetry in Massachusetts. The nonprofit group aims to broaden the audience of poetry readers, bring poetry to readers of all ages and transform people’s lives through inspiring verse.