The organization representing Canada’s major paint and coating manufacturers, and their industry suppliers, has announced the winner of its Industry Achievement Award.

“The success of CPCA’s advocacy efforts on behalf of its members relies on the strong technical support of its member companies,” said Gary Leroux, CPCA president. 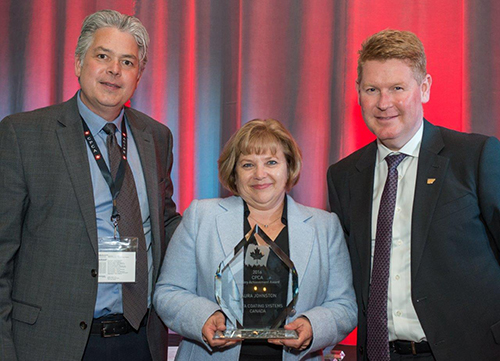 “Laura is a clear representation of that support,” Leroux added. “She is always available and willing to share her time and expertise for the benefit of the entire industry.”

For the past seven years, Johnston has worked with CPCA in various roles, currently as a member of its Paint and Coatings Working Group and Chair of the Health, Safety and Environment Committee.

In this role, she helped to shape the implementation of the Globally Harmonized System in Canada, seeking to update the pictograms, labels, safety data sheets, etc., so that Canada’s existing Workplace Hazardous Materials Information System more closely aligns with those used in the United States.

According to the government’s Health Canada department, these changes are expected to benefit trade between the two nations while also improving worker health and safety in Canada.

“The work that Laura does has a tremendous impact not only on Axalta’s operations, but on the broader coatings industry in Canada,” said Paul Chaney, Axalta’s Ajax, Canada plant manager.

“We are extremely proud of Laura’s contributions to the industry over her 17 years with Axalta,” he added. “This award is truly well-deserved.”

It helps to promote the sustainability of the coatings industry and advises on regulation and policy to help both governments and the industry meet their objectives.

According to the association’s website, the industry has more than 261 paint manufacturing establishments in Canada, with annual retail sales valued at more than $10 billion, directly and indirectly employing 31,800 employees.

The more than 6,000 retail outlets in Canada selling paint and coatings products include stores operated by CPCA’s members, the paint and coatings manufacturers, and big box and other stores that stock CPCA member-company brands.

Additionally, the country is home to more than 5,500 auto body paint and repair shops.

From light OEM vehicles, commercial vehicles and refinish applications to electric motors, buildings and pipelines, its coatings are designed to prevent corrosion, increase productivity and enable materials to last longer.